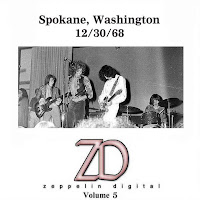 12/30/1968 Spokane, WA  Zeppelin Digital Vol. 5
Train Kept a Rollin', I Can't Quit You Baby, As Long as I Have You, Dazed and Confused, White Summer/Black Mountain Side, How Many More Times, Pat's Delight
I Can't Quit You Baby seems a bit rushed. Bonzo is on fire during As Long as I Have You. His drumming is very aggressive, especially during the Fresh Garbage section. Plant hits an amazingly high note on the final "long". Bonzo continues attacking the drums during Dazed and Confused, the last verse is played at breakneck speed. Another fierce attack on the drums in How Many More Times. Plant is hitting the highest notes Page can throw at him. The intro to Pat's Delight is lightning-fast and has a great funky groove, the solo itself is an attack on all fronts. Plant and Bonzo are the standouts of this show.
The tape is a bit overloaded with some hiss, but is surprisingly clear and enjoyable. I've had this show for nearly ten years, but never really gave it a good listen. This is an under-appreciated gem.

Jan 1, 2008
1968-12-30 Spokane, WA. Lifetime Guarantee (EVSD)
This was better than I recalled. Listened while doing an 8 mile New Years Day trail run, and with headphones the music sounded good, though Plant's vocals were a bit soft. Still, a great start. This version clocks in at 57:32 in length. I believe it is similar to th ZD version in quality.

Great work-I really hope you stick it out, because there is some great listening ahead. This also circulates as "Lifetime Guarantee" on the EVSD label.

Listening to this again, if you can get past the distortion, it is a good listen, Plant's vocals are a powerhouse, just wish the tape was clearer, and more complete.

How obscure was the opening band for Vanilla Fudge at Gonzaga University on Dec. 30, 1968? Well, the ads in both The Spokesman-Review and Chronicle read, "The Vanilla Fudge, with Len Zefflin." The ad copywriter misheard the name and thought it was some guy named "Len Zefflin."
Little did anybody know that old Len would turn out to be Led Zeppelin, one of the most popular and influential rock bands of all time.

That 1968 show at Gonzaga's Kennedy Pavilion would later assume a historic status in Zeppelin lore – all because a student brought a small tape recorder.
Today, this tape – bootlegged and distributed all over the world and the Web – is widely considered the first Led Zeppelin concert ever captured on tape; the earliest live recording of Led Zeppelin ever.

Here's how lead singer Robert Plant introduced one of the songs: "This is off an album that comes out in about three weeks time on the Atlantic label. It's called 'Led Zeppelin.' This is a tune … called 'Dazed and Confused.' "
So their first album wasn't even out yet. The album would not make a mark on the charts until February 1969. This concert was only their fifth in the U.S. The band had done tours of the U.K. and Scandinavia a few months before, many of them as The New Yardbirds, the band's short-lived original name. Some of these dates were actually leftover bookings for the Yardbirds, guitarist Jimmy Page's earlier band. Page and his new mates Plant, John Bonham and John Paul Jones had taken over some of these concert bookings.

Spokane was experiencing a severe cold snap that week, with temperatures dropping to 10 below. Apparently, the Kennedy Pavilion (Gonzaga's gym) wasn't well-heated either, because many fans remember it as being icy inside, as well. Plant said, between songs, "You won't believe this, but I don't think that either ourselves or our equipment is quite used to the temperature. It's taken about three hours of gas stoves under the equipment to get everything going." A little later Plant said they were now "getting warmed up properly," and you can hear the crowd response building after each song. By the evidence of the recording, the band's sound was already fully formed, distinguished by Plant's wailing voice – at one point he sounds like a siren – and Page's virtuoso guitar.

"We were hoping that the first band wouldn't stay on stage too long," said Kerry Whitsitt of Spokane. "Little did I know that by the end of Led Zeppelin's set, I would be reeling in my seat, transfixed by Robert Plant's voice, body language and raw sexuality (I just knew he was looking straight through me most of the night). … It was electric in every sense of the word. We didn't want them to leave the stage – ever!" Whitsitt recalls that Vanilla Fudge "paled in comparison," even though that band was riding high at the time with a hit version of "You Keep Me Hangin' On." Mike and Dorothy McMurtery said they left the show more impressed with Led Zeppelin, "whose hard rock music was ahead of its time for Spokane." Dave Cole said he was startled, at intermission, to see who was standing in line behind him at the concession stand. "Right behind me were Jimmy Page and Robert Plant, waiting to order," said Cole. "I thought it was pretty cool at the time. Several months later, when their first album was released and they got a lot more famous, I began to think it was even cooler." "Then when Vanilla Fudge came on, they were so sleepy," said Gallagher. "It was like, after that, psychedelia was dead and heavy metal was born, all in a three-hour show. We didn't care about psychedelia anymore. We all just ran back to our Yardbirds records."

Just FYI: Adam Dean's comment above is not from Adam Dean; it's by Jim Kershner and it's lifted directly from the Led Zeppelin website here:(http://www.ledzeppelin.com/show/december-30-1968)