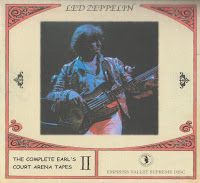 5/18/1975 London, England
Demand Unprecedented in the History of Rock Music
Rock and Roll, Sick Again, Over the Hills and Far Away, In My Time of Dying, The Song Remains the Same, The Rain Song, Kashmir, No Quarter, Tangerine, Going to California, That's the Way, Bron-Y-Aur Stomp, Trampled Underfoot, Moby Dick, Dazed and Confused, Stairway to Heaven, Whole Lotta Love, Black Dog
As the show begins, it's obvious that the band has loosened up. tearing ferociously through the opening numbers. Over the Hills and Far Away is introduced as "the ultimate dream." Page blazes through an excellent guitar solo as Bonzo and Jones hammer out a funky groove. In My Time of Dying is incredibly powerful. Bonzo is on fire during The Song Remains the Same. Page's guitar cuts out briefly during the second guitar solo. The Rain Song is absolutely beautiful. As the song ends, Plant introduces Jones as "the only man who wears onions on his shoulders that I've ever met in my life."
Kashmir features an incredible performance from Plant. No Quarter is outstanding. Jones's dramatic piano solo gives way to an epic instrumental section featuring a fantastic guitar solo from Page. The band receives a long ovation as the piece comes to a close. A truly amazing performance, one of the best thus far. Going to California is introduced as "a song about the permanent constant search for any man with a vivid imagination for a Guinnevere." Before Bron-Y-Aur Stomp, Plant tells the crowd "I'm gonna sack whichever road manager has burnt the lyrics to the next song." As the song ends, he exclaims "we are The Knights Who Say Ni!" Peter Grant is introduced as "the man who made it all possible" before Trampled Underfoot. Page delivers an aggressive guitar solo.
Plant introduces Bonzo as "a man with no taste, no manners, no friends... my very best friend, the man who always kicks me when I'm down, ladies and gentlemen, John Bonham!" before Moby Dick. The Woodstock interlude during Dazed and Confused is hauntingly beautiful. Plant's ethereal howls echo through the arena as the bow solo begins. Page's fingers get a bit sticky as he shreds through the frantic guitar solo/workout section. The return to the main riff is devastatingly heavy with Bonzo thrashing wildly at anything within reach. The hypnotic outro jam is a cacophonous explosion of energy. As the song ends, someone near the taper can be heard saying "is that the end?"
Stairway to Heaven is introduced as "a song that came to us in a moment of great peace and tranquility." Page blazes through an excellent guitar solo. Plant delivers the final line in absolute silence. The band plods their way through the show-closing Black Dog. As they leave the stage, Plant announces "we'd like to that the road crew, Showco... and Denis Healey for being such a perv, goodnight."
The tape is a combination of three sources, all clear and enjoyable.

I disagree. The Rain Song was lackluster on this show, well like the most of the songs. The Earls Court shows aren't great on the way wich everyone says for me, and some 1977 shows are such better than these ones. 1975 was a mess, really.

I think the performance of this 2nd night show is fine, it is the recordings (now in 2015, plural, with the so-called "Mike B" addition) that leave you flat. Add to it that if this additional 2015 recording is in fact for real, then both tapers were within a few feet or rows of one another, as the crowd noise is virtually identical for both "No Quarter" or "Black Dragon, Blue Axe" or whatever and the new 2015 EVSD "Journey Into The Fourth Dimension". These recordings are all somewhat distant (sounding) audience tapes that unfortunately were recorded overloaded, so there is inherent distortion that just cannot be overcome no matter how you pretty up the package. The band are most certainly more loose from the previous opening night, and it's a noteworthy good performance, but the recording quality isn't up to that standard. That's how I hear it.