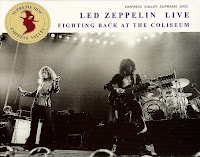 2/13/1975 Uniondale, NY  Fighting Back at the Coliseum
Rock and Roll, Sick Again, Over the Hills and Far Away, In My Time of Dying, The Song Remains the Same, The Rain Song, Kashmir, No Quarter, Trampled Underfoot, Moby Dick, Dazed and Confused, Stairway to Heaven, Whole Lotta Love, Black Dog, Communication Breakdown
The tape begins with the usual announcement of "the American return of Led Zeppelin." The crowd erupts as Rock and Roll crashes into motion. Page shreds through the guitar solos during Sick Again. As the song ends, Plant tells the crowd "tonight we are feeling good," and it shows. Page solos wildly as Bonzo and Jones hold down a funky groove during Over the Hills and Far Away. In My Time of Dying is outstanding. There is a slight cut near the beginning of The Song Remains the Same. There are some minor speed fluctuations during an otherwise excellent performance of The Rain Song.
No Quarter is absolutely fantastic. Jones's dramatic piano solo is followed by a flawlessly epic guitar solo from Page. An amazing performance, one of the best thus far. Before Dazed and Confused, Plant tells the crowd "we got together a long time ago in a little tiny room, couldn't afford a big room... and one of the first things that we did made up our mind to stick together... and this was it." The San Francisco interlude is hauntingly beautiful, one of the best iterations of the piece thus far. The band is absolutely on fire during the marathon guitar solo/workout section, led by Page's maniacal, lightning-fast soloing. He once again includes the riff from Walter's Walk briefly before a slight cut in the tape. The Mars, The Bringer of War section is utterly devastating. The forty-one minute epic reaches its climax with the blistering outro jam. A stellar performance, quite possibly the best thus far. Undoubtedly the longest and most complex.
Whole Lotta Love is played nearly complete for the first time this tour. The frenzied theramin freakout is linked nonstop with the Out on the Tiles intro to Black Dog. Page shreds erratically through the guitar solo. As the band returns to the stage, Plant introduces "a good friend of ours, Mr. Ron Wood!" joking "we're going to have a happening." He hints at Roll Over Beethoven before introducing Communication Breakdown as "an old Led Faces number." Page and Wood trade licks during a fantastic funky breakdown leading up to the frenzied finale. A phenomenal performance. Must hear.
The tape is an excellent audience recording, very clear and well-balanced, augmented by an inferior recording, which is a bit muffled and noisy.
Click here for an audio sample courtesy of Black Beauty.

Great review. It seems quite a few people are down on this show for various reasons, and I don't get it. I think the whole show is fantastic. Dazed and Confused has probably the ultimate coda jam. Intense I think is a pretty good description. I don't remember where I read this, but "Page extends the outro until it hurts." Overall, great show, on par with the much heralded next night.

To me, this show has a lot of good moments but a lot of mediocre ones, too. I'd say this even about Dazed. On the upside, this show has good variety in the playing-- it sounds noticeably different than other ones from 1975.

An excellent soundboard of this was just released by Empress Valley. The audience is very good, but the soundboard really shows how good this show is. Communication breakdown really benefits from the sound upgrade.

The dadgad remaster of the recently surfaced soundboard recording is a must hear. The entire concert is a joy to listen to from beginning to end.

I just listened to the entire show with the new soundboard source. It's a totally different experience. To my ears, it now sounds like one of the best concerts from 1975. I don't really hear any "mediocre" moments. WLL and Black Dog are a bit plodding at times, and the show doesn't seem to be quite as high energy as the 12th. Other than that, I agree with the previous commenters that it's very enjoyable. Page's creative playing, in particular, is a major highlight to me, and Plant's voice seems more consistent than on the 12th. Communication Breakdown and Dazed are two other highlights. If you're a fan, I'd recommend that you have this show in your collection.

I went and a week before 2/7 - Plant's voice was better than 2/7. Had orchestra seats in the rear but by the time the encores started was past front row looking up from the high stage this place has... couldn't get closer - what a night!

This is an awesome concert!!!! One of the best thus far!!!! The SBD source is fantastic!!!! There is a boxset by EV that includes the 13th and 14th shows. But this is a great show!!! Thanks for the review!!!