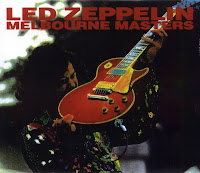 2/20/1972 Melbourne, Australia Melbourne Masters
Immigrant Song, Heartbreaker, Black Dog, Since I've Been Loving You, Stairway to Heaven, Going to California, That's the Way, Tangerine, Bron-Y-Aur Stomp, Dazed and Confused, Rock and Roll, Whole Lotta Love
The tape begins just as Immigrant Song is getting underway. There is a slight cut at the beginning of the a cappella solo in Heartbreaker. Page shreds through the guitar solo. The tape is cut between songs. Since I've Been Loving You is dramatic and powerful. Plant tries for the high notes at the end of Stairway to Heaven, but falls short. Before That's the Way, Plant tells the crowd "if you're gonna listen, listen... if you're gonna make a racket, go away." The source changes to a slightly inferior recording before Tangerine. Bron-Y-Aur Stomp is dedicated to Plant's dog Stryder for the first time.
Dazed and Confused is introduced as "one from a long, long time ago for everybody who's as cool as I am" by Plant. Page solos wildly over a Santana-esque rhythm during the lead-in to the bow solo. The guitar solo/workout section is an epic journey. Plant improvises lyrics about the impending rain storm during the final verse. A cut in the tape during the finale leads directly into the intro of a riotous Rock and Roll. The show ends with a lightning-fast Whole Lotta Love. The shortest medley thus far includes Boogie Chillen' and Elvis Presley's Let's Have a Party, during which the tape switches to a greatly inferior source. Plant tells the crowd it's time to go before they all blow up "because electricity and water just don't get together at all" as the band leaves the stage.
The tape is a combination of three sources, primarily clear and well-balanced. Highly enjoyable.