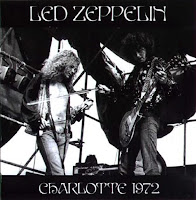 6/9/1972 Charlotte, NC  Charlotte 1972
Immigrant Song, Heartbreaker, Celebration Day, Black Dog, Since I've Been Loving You, Stairway to Heaven, Going to California, That's the Way, Tangerine, Bron-Y-Aur Stomp, Dazed and Confused, What is and What Should never Be, Moby Dick, Whole Lotta Love, Rock and Roll, Communication Breakdown
Page has the crowd clapping along with his country-flavored licks during the a cappella solo in Heartbreaker. Plant sounds a bit under the weather, his voice breaking a few times during the final verse. Celebration Day seems a bit sluggish. Black Dog is introduced as "a song dedicated to an old hunting dog in England... he used to go out to see his lady friend and he used to get so wasted that he couldn't get back!" Page blazes through the guitar solo. The tape is cut between songs. Since I've Been Loving You is slow and mournful. Page, Plant, and Bonzo play a bit of Knees Up Mother Brown before Stairway to Heaven. One of the tapers comments "I'm hopin' they'll get better... they look like they're kinda drunk or somethin'... they are much better than this" after Tangerine.
The initial verses of Dazed and Confused are slow and loose. Plant improvises lyrics to calm the rowdy crowd during the heavy lead-in to the bow solo, which is cut slightly at the beginning. The ever-expanding guitar solo/workout section features an excellent Walter's Walk jam. Plant warns the crowd to stay off the stage before What is and What Should Never Be. He introduces Bonzo as "weighing in at two hundred and ten pounds... two hundred and six pounds, John Henry Bonham, Moby Dick!" Jones pounds on his organ during the theramin freakout in Whole Lotta Love, which is played without a medley for the first time since the Bath Festival. A shout of "fuck your latest album!" can be heard coming from the crowd as Plant introduces Rock and Roll. The show ends with a somewhat sluggish Communication Breakdown. A rather lazy performance overall with a few moments of inspiration.
The tape is fairly clear with Plant front and center.
Click here for audio samples courtesy of Black Beauty.

your dedication to this project is nothing short of legendary.

Question, From where do you pull most of these recordings?

Haha, I'm on a mission from God.

I've been collecting for around 10 years or so, picking up recordings here and there from a number of different places over the years. There are a lot of great people out there sharing all sorts of shows on various bit torrent communities. Here's a few good places to start if you're interested in getting a hold of some shows:

I remember this concert.Still have my ticket stub.I recall that the Charlotte coliseum had a very small crowd because in those days high schools just ended for the summer and everyone headed to Myrtle Beach. So I went as well, but hauled ass back to see this show. The guys did a good job considering there were maybe 3,000 fans looking on.

My friend, i can't understand why you criticized this concert on this way. This performance isn't SLUGGISH like you said! This is one of the best ever 1972 concert man!! The performance is simply epic...i disagree completely of the review.

I'm the person that recorded this show from about a dozen rows back from the stage. Sorry about the talking. Had to stop during slow part of Dazed and Confused to put in a new cassette because the tape was about to run out. I disagree about it being a sluggish show. The crowd was very sedate. I would say the Coliseum was about 2/3rd's full. Drove up from Atlanta with friends. The versions of Since I Been Loving You, Stairway and Dazed are as good as any I've ever heard. The guitar solo at the end of Stairway is my favorite of any live version. The last 12 minutes or so of Dazed & Confused is the best guitar work I've ever heard on this part of the song, better than any other bootleg version or legit release. The call and response between Page and Plant is fantastic and they keep it moving at an energetic pace for the whole 12 minutes.

I must say I concur with the commentary here...this is a darned good show. I have several of the 72 shows, and this is really, really good. What makes one of these concerts an overall "must hear"? The performance hear is not sluggish or sloppy, and it is nicely recorded from the audience. Some of the so-called "must hear" shows are not at all as good as this one. Oh well, to each his own, I guess.

I enjoyed the show. Sometime in May my friends had driven to Charlotte from Columbia, SC to get tickets for a July Rolling Stones concert and came back with Zeppelin tickets instead. The Stones tickets were not on sale. The day of the concert we left Columbia after 5:00 PM for the 2-1/2 hour drive to the Charlotte Coliseum. We got to our seats just at the band was coming on stage. I saw them before at the 1969 Atlanta Pop Festival which was cool but this was something special being indoors where the sound was much better. Yes, we did get to see the Stones in July with mail order tickets.,

@Anonymous - To the person who taped the show. Thank you. Do you happen to have a copy of your tapes?