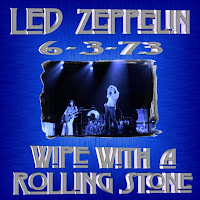 6/3/1973 Los Angeles, CA Wipe With a Rolling Stone
Rock and Roll, Celebration Day, Black Dog, Over the Hills and Far Away, Misty Mountain Hop, Since I've Been Loving You, No Quarter, The Song Remains the Same, The Rain Song, Dazed and Confused, Stairway to Heaven, Moby Dick, Heartbreaker, Whole Lotta Love, The Ocean, Communication Breakdown, Thank You
The last night of the first leg of the tour begins with the sound of rhythmic stomping, the crowd eagerly anticipating the start of the show. Following a brief soundcheck, the arena explodes with excitement as Rock and Roll crashes into motion. The walls quake under the power of Bonzo's bass drum as Page's guitar solo slashes and shreds through the cacophonous roar like a razor blade. The rhythm section is unstoppable during a brutal Celebration Day, hammering forward, full steam ahead as Plant's vocals echo out over the crowd.
A cut in the tape just after the third verse of Black Dog leaves us at the end of the guitar solo in Over the Hills and Far Away. Bonzo hammers wildly at his drums during Misty Mountain Hop. Despite a few tape disturbances early in the song, Since I've Been Loving You is amazingly powerful. One of the best performances in recent memory. Plant introduces No Quarter as "a track off the new album, which features the dynamite piano playing of John Paul Jones." Unfortunately, following a cut during the first verse, the tape is marred with constant speed fluctuations. The Song Remains the Same is dedicated to "the toilet paper that people buy in this part of the world called the Rolling Stone." Page absolutely shreds through the guitar solos. Fortunately, the speed fluctuations subside by the end of The Rain Song.
The lead-in to the bow solo during Dazed and Confused is excellent. Unfortunately, the San Francisco interlude is cut short by a series of major tape disturbances which thankfully disappear a few minutes into the bow solo. The band is on fire during the absolutely amazing guitar solo/workout section. A phenomenal performance. As the song ends, Plant again makes mention of Page's sprained finger, telling the crowd that he's been soaking it in a bucket of cold water since the original date was cancelled a few days prior. Stairway to Heaven features a fantastic guitar solo from Page. The final verse is incredibly powerful.
Moby Dick is introduced as "a real high-energy trip." There is a cut in the tape about halfway through the epic drum solo. Plant dedicates Heartbreaker to Slade. The theramin freakout during Whole Lotta Love is transformed into a frantic stop-start battle between Page and the rest of the band. Plant's boogie rap gives way to an excellent rendition of Don Nix's Going Down, followed by I'm a Man and The Hunter. Page blazes through the guitar solo during the riotous Boogie Chillen' section. The Ocean is excellent. Page shreds through the guitar solo during a blistering Communication Breakdown. The band closes the show with a fantastic performance of Thank You, one of the best thus far. A fitting send-off to the first leg of the tour. Must hear.
The tape is clear and well-balanced, if a bit noisy on the high end. Unfortunately, the aforementioned tape issues, along with the frequent shifting from stereo to mono throughout the first part of the show detract from an otherwise amazing performance.

Great show. The second half could rank as the best of the tour along with Seattle. Shame about the tape issues but hey ho. Zep somewhere near their very best.