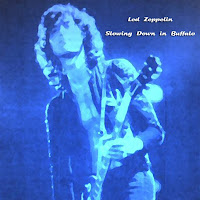 7/15/1973 Buffalo, NY  Slowing Down in Buffalo
Rock and Roll, Celebration Day, Black Dog, Over the Hills and Far Away, Misty Mountain Hop, Since I've Been Loving You, No Quarter, The Song Remains the Same, The Rain Song, Dazed and Confused, Stairway to Heaven, Moby Dick, Heartbreaker, Whole Lotta Love, The Ocean
The relentless touring schedule continues to take its toll on Plant's fragile voice. He struggles to maintain control as Rock and Roll gets underway. As Black Dog ends, Plant apologizes to the crowd for the delay, explaining that Page's guitar "has had a bit of an accident, but we got it fixed now." Over the Hills and Far Away is introduced as "a song about the journey that we're all on." The intro is interrupted by a loud firecracker blast, prompting Plant to respond "that's one guy who's not on the same journey." Page blazes through an excellent guitar solo.
No Quarter is fantastic, despite Page's occasionally sticky fingers. The Rain Song is absolutely beautiful. Dazed and Confused is introduced as "one of the old ones." Page hints at The Rover during a frantic call and response with Bonzo and Jones prior to the haunting San Francisco interlude. The transition to the bow solo is highly dramatic. A loud firecracker blast interrupts the eery soundscape. Page is on fire during the guitar solo/workout section. As the song ends, Bonzo can be heard shouting "well done Jim!" before Plant announces "I dunno who the sadist was who lit off the bomb, but he really is a jerk-off."
Bonzo is introduced as "the all-time percussionist of rock and roll" before Moby Dick. Page shreds wildly through the solos during Heartbreaker. Bonzo and Jones explore an infectious funky groove during the theramin freakout in Whole Lotta Love. Page joins in for a frantic race to the finish. Plant makes a brief reference to Gallows Pole during his boogie rap. Before the show-closing The Ocean, Plant announces "this requires the vocal talents of John Bonham."
The tape is a combination of two sources. The soundboard tape, used through Stairway to Heaven, is clear and well-balanced, if a bit noisy at times. The audience tape is distant and muffled with mild tape disturbances throughout.
Click here for audio samples courtesy of Black Beauty.

One of my favourite shows from '73 aside from Plants fragile voice the band is in great form.