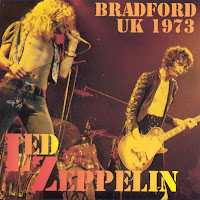 1/18/1973 Bradford, England Bradford UK 1973
Rock and Roll, Over the Hills and Far Away, Black Dog, Misty Mountain Hop, Since I've Been Loving You, Dancing Days, Bron-Y-Aur Stomp, The Song Remains the Same, The Rain Song, Dazed and Confused*, Stairway to Heaven, Whole Lotta Love*, Heartbreaker, Immigrant Song*
*- soundboard (1st gen)
Plant's voice is still a bit rough, but he doesn't let it effect his enthusiasm during Rock and Roll. There is a cut in the tape during the guitar solo in Over the Hills and Far Away. The first few bars of Dancing Days are cut as well. Page once again plays a bit of That's the Way during the instrumental breakdown in Bron-Y-Aur Stomp. There are some slight speed fluctuations during The Song Remains the Same. The lead-in to the bow solo during Dazed and Confused features an excellent funky jam before a frantic San Francisco interlude. Page is on fire during the epic guitar solo/workout section, experimenting wildly with new riffs and themes as Bonzo provides running rhythmic commentary. Plant unleashes a barrage of spine-chilling screams during his call and response with Page.
The Everybody Needs Somebody to Love section during Whole Lotta Love is a riotous explosion. Plant includes some terribly provocative lyrics from Let it Bleed during a great funky breakdown prior to the guitar solo. Page leads the band in an excellent bluesy jam during Plant's boogie rap. The medley proper includes Boogie Chillen', Elvis Presley's (You're So Square) Baby I Don't Care, a single verse of Blue Suede Shoes, Let's Have a Party, I Can't Quit You Baby, and Goin' Down Slow. The band closes the show with what will prove to be the final recorded performance of Immigrant Song, an odd choice considering Plant's recent vocal troubles. As the band leaves the stage, Plant announces "thank you very much... Elvis Presley has now left the building."
The audience tape is muffled, noisy, and distant. The soundboard tape is excellent.
Click here for audio samples courtesy of Black Beauty.

I've never heard this show but how the heck is imigrant song played?

The board segment is a complete must hear without doubt.
Arguably the very best of the tour. Shame there's so little of it. Robert in Elvis mood and Jimmy's 'light and shade' bonanza.
LISTEN PRONTO.