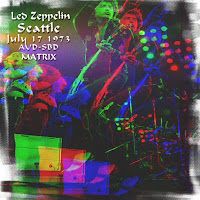 7/17/1973 Seattle, WA  Seattle Matrix
Rock and Roll, Celebration Day, Black Dog, Over the Hills and Far Away, Misty Mountain Hop, Since I've Been Loving You, No Quarter, The Song Remains the Same, The Rain Song, Dazed and Confused, Stairway to Heaven, Moby Dick, Heartbreaker, Whole Lotta Love, The Ocean
The tape begins with a stage announcement asking the crowd to stop setting off fireworks and promising a three hour show if everyone stays cool, which receives a thunderous cheer. Page shreds wildly through the guitar solo at the end of Celebration Day. Following Black Dog, Plant greets the crowd, saying "it's more than a pleasure to be back again, really." Misty Mountain Hop is dedicated to "the guys who drove the buses" full of fans from Vancouver to the first show in Seattle the year before. Since I've Been Loving You is highly dramatic and powerful.
The instrumental section during No Quarter is an epic journey. A truly amazing performance, one of the best thus far. The Rain Song is absolutely fantastic. Bonzo hammers wildly at his drums during the initial verses of Dazed and Confused. Page shreds through the frantic lead-in to the bow solo. The San Francisco interlude is devastatingly heavy. Bonzo and Jones are locked into each other as Page's sticky fingers fly across the fretboard during the erratic guitar solo/workout section. As the song ends, Plant tells the crowd "that was somethin' that contains so many different constructions and time signatures and things, every night it gets really far out, I wish I could sit and listen to it like you folks" before introducing Stairway to Heaven as "something entirely different." Page delivers an excellent, dynamic guitar solo.
Moby Dick is introduced as "something with equally as much energy and power... and vibration." Page, Jones, and Bonzo are on fire during the frenzied fast guitar solo section in Heartbreaker. The theramin freakout during Whole Lotta Love is followed by an excellent funky jam. The Boogie Chillen' section features a blistering guitar solo from Page. The band returns to the stage to close the show with an explosive The Ocean. An outstanding performance. Must hear.
The tape is a combination of three sources. The soundboard/audience matrix, used through Stairway to Heaven, is very clear and well-balanced, if a bit hissy during the quieter moments. The second audience tape, used for the remainder of the show, is a bit distant.

I have always heard the soundboard source and thought the show sounded a bit flat. The soundboard matrix had a lot of hiss and the dagdad remaster seemed overloaded and flat in many places (except Dazed which is top 5 all time). I recently listened to an audience version "D & D Archives Master Series Volume 1 (JEMS)" that I got from Yeekshul and the okay sounding concert instantly became a great concert and one of the very best from 1973. I am pretty sure I will keep the audience for the whole concert except Dazed which sounds great with the Soundboard.

Most definitely a Must Hear. I have recently got hold of the LiquidLed release of this concert, and it is stunning to think it a boot. The quality of performance and recording together would equal any live Led Zep I have heard. It is hands down better than TSRTS in every way, and could have easily been released as a commercial live album.