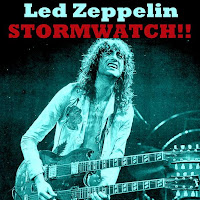 6/3/1977 Tampa, FL  Stormwatch!! (source 2)
The Song Remains the Same, Sick Again, Nobody's Fault But Mine
The ill-fated return to Tampa Stadium begins with someone near the taper shouting "bring on the blimp!" into a megaphone before the band takes the stage. The show gets off to a strong start with a frantic The Song Remains the Same. Page's fingers fly across the fretboard as Bonzo thrashes wildly at anything within reach. Plant barks aggressively as the band hammers through Sick Again. Page blazes through the guitar solos. As the song ends, Plant tells the crowd "it's more than a pleasure to be back in the Tampa region again."
Bonzo misses a cue as Plant begins the harmonica solo during Nobody's Fault But Mine, but quickly gets back on track. The recording becomes quite muffled soon after as the taper attempts to protect his equipment from the inclement weather. Someone can be heard saying "this is the worst" as the crowd scrambles for cover from the rain while Page shreds through the guitar solo onstage. As the song ends, Plant announces "we want you to bear with us because there seems to be some water falling on the electrical equipment... so we're gonna give it a fifteen minute break, are you cool?" Following a cut in the tape, someone onstage gives the crowd instructions on how to obtain an IOU for admittance to a makeup show the following night. Unfortunately, the subsequent riot would cause the local police to prevent the show from being rescheduled.
The tape is very clear and well-balanced and includes three brief news clips reporting on the incident.

I attended that concert. During the brief performance, I was near the middle of the stage, where it was a rolling sea of humanity — I had never seen anything like it. After the rain started, I went up into the stands, where I watched the cops brutally attack those who remained on the field. This is my ticket stub.

I was at that concert as well. I was only 17 and a few of my somewhat older friends and I drove to Tampa from Miami.

I don't recall if we left shortly before the rioting or were just not aware of the extent of it. We did see what (seemed like a few)get angry and give the apperance of wanting a rumble.


We were all let down. We were so into Zep and for many of us it was our first trip away from home with out parents.

Still love Zep till this day and always will.

I was there. 16 yrs old and caught in the middle of the stage front crowd as the rain came down.

I had just turned 19, and came from Miami. We were in the stands and not on the field. Remember the clouds and the torrential downpour... Not your typical Florida afternoon storm :(

This is such an interesting blog. You are very knowledgeable about this subject. Please check out my site.
Swim lessons

I was there 17 and full of hell. Boy oh boy did that change once the rain came. I also remember all day long they played the Eagles Hotel California over the PA. I hated that record at the time.
Long live Zeppelin!

That cloud followed me from Brooksville where Paris Hilton got kicked by a horse and Hughie Thomasson of Outlaws fame died.

I was there with my brother and dad. Our dad was the general manager of BJ105 radio in Orlando so we got in free. I also remember walking next to the limos and our dad talking to the groupies drinking Jack from the bottle.. I remember it well as our dad made me and my older brother wear suits to the concert. LOL! I was almost 11 and my brother 13. We kept our un-torn tickets / stubs in a photo album that some punk friend of ours stole from us sometime around 1981 from our home in Longwood. I would love to have them back as our dad died the next year after the concert in 78 and this was such a great memory for us.
Any how what a cool experience for us kids watching all the rioting going on. I remember so many people that were totally wasted even a couple of naked girls. WE sat at 20 yard line east side of stadium almost at the top.no no no no no no no no nooo bodys fault !! Awsome

I was 14 years old and my first concert.we got there around 11am. What a experience. We were partying all day in the stadium before the concert. That was the first time I heard the eagles hotel California album which play off and on all day. Even though it rained

I grew up in Jax fla. I couldn't get off work to go to concert. My husband went alone. He is the one being dragged off field in newspaper article. Wearing his Bob Seeger night moves shirt. Lol he was arrested. Charge was throwing deadly middle. He threw empty beer bottle at empty stage. He got 5 yrs probation. Wow been awhile

I was there as well and watched the huge cloud come towards the stage. I was tripping and 19 years old from Lake Park, Florida We escaped the riot and made it back to the Van when everyone started trying to get inside. It was pouring rain and it turned out to be a bad trip