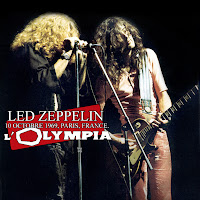 10/10/1969 Paris, France L'Olympia
Good Times Bad Times/Communication Breakdown, I Can't Quit You Baby, Heartbreaker, Dazed and Confused, White Summer/Black Mountain Side, You Shook Me, How Many More Times
The newly-surfaced french radio show, rebroadcast last month for the first time since its November 1969 premiere, begins with a brief stage announcement before Bonzo counts off to the first appearance of the Good Times Bad Times/Communication Breakdown opener. Plant is in exceptional voice, faithfully recreating every high note. He shakes the mic violently during the intro to I Can't Quit You Baby. The modern french radio announcer makes his first intrusive appearance during Page's excellent solo.
Bonzo comments "they don't even know what it is!" as Plant introduces the first appearance of Heartbreaker to the crowd. The performance is very similar to the version on Led Zeppelin II. There is a strange echo effect added to Page's a cappella guitar solo. Whether this effect was added live by the sound engineer or later by the radio station is unclear. The same echo effect is used sporadically throughout Dazed and Confused, leaving us with an army of Bonzos. The DJ returns at the beginning of an especially eerie bow solo. Page is introduced as "The Wanking Dog" by Bonzo and Plant before White Summer/Black Mountain Side. The DJ once again intrudes during a quiet passage. Plant adlibs new lyrics during You Shook Me. Jones and Bonzo are like a well-oiled machine.
The recording ends with an excellent How Many More Times. Page solos wildly during an extended Bolero section, including some Over Under Sideways Down licks. Plant tells someone in the crowd to shut up during the "got you in the sights..." section, just before another interruption by the DJ. Plant makes mention of a girl who's been with Aynsley Dunbar during his intro to the medley, drawing laughter from the crowd. The medley includes John Lee Hooker's Boogie Chillen, now with lyrics from Plant. The atmosphere on stage is very playful as Plant reaches the final "gun!" The finale is devastatingly heavy with Plant grunting seductively as the band explodes around him.
The tape is an excellent brand-new radio broadcast. Definitely a must hear.
Click here for audio samples courtesy of Black Beauty.

1969-10-10, L'Olympia, Paris, France (Cuztard Pi Production)
Sound is clear and balanced, a bit thin, but that's more just looking for something to criticize with it. Custard Pi looks to have started with a satellite broadcast of the show and cleaned it up by removing some clicks and DJ chat and whatnot. Show starts with the first appearance that was captured on tape of Good Times Bad Times, though abbreviated to about 30 seconds before going into Communication Breakdown. I Can't Quit You Baby is up next, and the sound is really catching my ear, everything is balanced from the vocals to the bass - quite unusual, someone was on the ball on the mixing board, heh. Plant then introduces a 'song from the new album' .. Heartbreaker, which from what I can tell is another song new to the recorded concerts. It sounds quite similar to the released version, down to the breakneck guitar solo. Dazed and Confused is next, then Page on White Summer - Black Mountain Side, and as usual, Page smokes thru them. A fairly standard You Shook Me follows. Show ends with How Many More Times. The info file from the torrent implies that the first time this was broadcast around when the show happened, there was more to it - where ever that complete recording is, hard to say if it'll ever see the light of day.

Best new 1969 tape to surface in the last few years and that's saying allot. The whole band is SPOT ON!

The new Pre-Fm source blows this one away!!!


As usual spot on review!!!

I can't even imagine what it must have been like to hear "Heartbreaker" for the very first time in this performance. I don't know if Page ever played it better than this. This show is mounting a serious challenge to 1970-01-09 Royal Albert Hall as my all-time #1.

Keep looking until you find the non-DJ version - a large improvement. The recording well captures the auditory ambience of the theater, making for a very immersive listening experience.

There is a show on YouTube that is from Paris and says "full concert" (implying that the show Jimmy gave us as a companion disc and this show are the same), but they are NOT. Listen closely and you will see. I would love to know where this show is from. Did they do two shows in Paris???