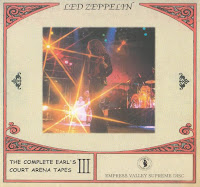 5/23/1975 London, England
Demand Unprecedented in the History of Rock Music
Rock and Roll, Sick Again, Over the Hills and Far Away, In My Time of Dying, The Song Remains the Same, The Rain Song, Kashmir, No Quarter, Tangerine, Going to California, That's the Way, Bron-Y-Aur Stomp, Trampled Underfoot, Moby Dick, Dazed and Confused, Stairway to Heaven, Whole Lotta Love, Black Dog
The band's third night at Earls Court begins with an enthusiastic introduction by David 'Kid' Jensen before Rock and Roll explodes out of the gate. Bonzo is like a thunderous stampede, hammering at his drums with incredible intensity. Page tears through the guitar solos during an aggressive Sick Again. In My Time of Dying is a wild cacophony. The band gets a bit lost in the melee at times. Plant hints at You Shook Me near the end of the song. Page's fingers are a bit sticky during The Song Remains the Same. Plant tells the crowd "my left arm is swollen beyond all proportion because I just had it chipped for cholera and smallpox and everything else that we might catch while we go hunting in the jungle for new words and new songs for a new album" following The Rain Song.
Jones is introduced as "Jonesy the maestro" before No Quarter. The electric piano intro is nearly inaudible due to PA problems, recovering before the first verse. Jones's ominous piano solo is followed by a long, wandering guitar solo from Page. Plant hints as When the Levee Breaks while introducing Tangerine as "a song of simple love, first love." That's the Way is beautiful. As the song ends, Bonzo announces "Robert Plant on vocals!" Plant tells the crowd "I think this evening is beginning to feel... silly!" before an explosive Trampled Underfoot. Bonzo is introduced as "a friend, a truly great percussionist, a man with a big heart" before Moby Dick.
Plant unleashes a spine-chilling scream at the beginning of the third verse of Dazed and Confused. The bow solo is preceded by a hauntingly heavy San Francisco interlude. Page shreds erratically through the guitar solo/workout section. The band nearly falls apart during the return to the main riff. The thunderous finale is punctuated by another blood-curdling scream from Plant. Stairway to Heaven is dedicated to journalist Chris Schaar Murray, who had recently described the band as "like a vibrator, it can get you off something ridiculous, but it can't kiss you goodnight." Page delivers an excellent guitar solo. The band closes the show with a devastatingly heavy Black Dog.
The tape is fairly clear, if a bit distant and noisy.
Click here for an audio sample courtesy of Black Beauty.