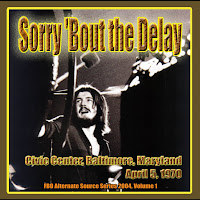 4/5/1970 Baltimore, MD  Sorry 'Bout the Delay
We're Gonna Groove, Dazed and Confused, Heartbreaker, Bring it on Home, White Summer/Black Mountain Side, What is and What Should Never Be, Thank You, Moby Dick, How Many More Times, Whole Lotta Love
Plant misses the final verse in We're Gonna Groove, causing some confusion which results in a disjointed ending. Plant apologizes for the sound as they're working with a new PA system. He makes mention of the problem again during the first verses of Dazed and Confused before the PA briefly fails completely, much to the amusement of those near the taper. Bring it on Home is cut just as the rock section is getting underway.* An abbreviated White Summer/Black Mountain Side is followed by another cut in the tape, which leads directly into What is and What Should Never Be.
There are a few dropouts/cuts during Thank You. Moby Dick is cut about seven minutes in, losing a large chunk of the solo and leaving us in the middle of the finale.* How Many More Times begins with a drum intro to a funky jam. Bonzo thrashes his way through the first verse. Plant once again struggles to maintain a cool atmosphere over the crowd. The medley includes a riotous That's All Right as well as a bit of Muddy Waters's Honey Bee. The return to the main riff is devastating with Bonzo destroying everything within reach. Plant tells the crowd to "be careful of those policemen on the way out" as they leave the stage.
The tape is fairly clear, if a bit distant, with some hiss and scattered dropouts throughout.
*- a more complete alternate source exists, but is not currently in our collection.

1970-04-05, Civic Center, Baltimore, MD (From Source)
I have two AUD sources, this one seems to be a bit more complete, though with the quality of the recording, I'm not so sure that's a good thing. Lots of hiss and noise, tape drop out, and flat sounding. Set list is the same as it has been in the recent shows. Show starts with We're Gonna Groove and Dazed and Confused. At times the tape sounds like it's clearing up, especially during Dazed and Confused, but then it goes back to being muffled. Perhaps the taper has to keep hiding the mic in his jacket when security comes by or something, heh. As the show progress, things are sounding better. By the the of Organ Solo - Thank You and Moby Dick, things have improved enough I'm actually paying attention. Things drop off with How Many More Times, music gets a bit more distant, and quite a bit of talking can be heard. Whole Lotta Love wraps things up. Overall a decent listen.

I'd absolutely no clued all of the company I used to be passing up on. It's really unbelievable--I'm nevertheless grabbing myself! Young Adult Sober Living