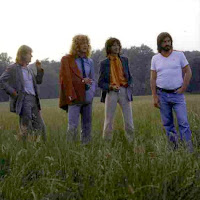 7/23/1979 Copenhagen, Denmark  Copenhagen Warm-Ups
The Song Remains the Same, Celebration Day, Black Dog, Nobody's Fault But Mine, Over the Hills and Far Away, Misty Mountain Hop, Since I've Been Loving You, No Quarter, Hot Dog, The Rain Song, White Summer/Black Mountain Side, Kashmir, Trampled Underfoot, Achilles Last Stand, In the Evening, Stairway to Heaven, Rock and Roll
Two years after tragedy brought the 1977 North American tour to an abrupt end, the band has risen from the ashes to prepare for the biggest shows of their career with two warm-up gigs in Denmark. The setlist has undergone a few changes to make room for a couple new songs from the band's yet to be released final studio album In Through the Out Door, along with some old favorites. As the band takes the stage, Plant complains about the lights, telling the crowd "we must apologize... the lights keep going down, so we're gonna play with like half a light show, okay?" After a long pause, the show finally gets underway with the familiar opening chords of The Song Remains the Same. The band is full of energy as they hammer through the song with incredible intensity. Plant is still getting a feel for his mature voice, missing a few notes that used to come more easily. As the song ends, Page launches into the first appearance of Celebration Day since 7/29/1973.
Plant tells the crowd "it's been eight years since we were here last time, so there's not too much talkin' to do... quite a bit of playing" before introducing a bone-crushing Black Dog. Page is on fire, shredding wildly during the guitar solo. Plant walks away from the microphone to retrieve his harmonica before introducing Nobody's Fault But Mine, telling the crowd "this is from Blind Willie Johnson." Over the Hills and Far Away is immediately followed by a high-speed Misty Mountain Hop, its first appearance since the end of the 1973 North American tour. Page seems a bit lost during the guitar solo. Since I've Been Loving You is played in a jazzy new arrangement. Page blazes through a fantastic extended guitar solo. Plant's voice is still a bit rusty, he has trouble reaching some of the higher notes. No Quarter has been stripped down to basics, replacing the overindulgent marathons of the past with a much more efficient arrangement. The crowd begins clapping rhythmically during any lull in Jones's piano solo. Page tears through the guitar solo with amazing fluency and precision.
Plant mentions the new album before the first premiere of the night, Hot Dog. Someone in the crowd can be heard shouting a mispronounced "D'yer Mak'er!", to which Plant responds "never 'eard of it" before introducing a beautiful rendition of The Rain Song, performed for the first time since the final night at Earls Court. Kashmir is preceded by an abbreviated White Summer/Black Mountain Side. Plant hints at Back Door Man before a thunderous Achilles Last Stand, played at a more relaxed tempo than usual. The second premiere of the night comes with the first performance of In the Evening, which is preceded by a short bows solo from Page. Plant delivers a powerful performance, belting out each line with bravado. The crowd erupts as Page begins Stairway to Heaven. As the band leaves the stage following a raucous Rock and Roll, Plant announces "thank you very much, it was... okay, goodnight." An excellent first outing for a new, more professional Led Zeppelin. Must hear.
The tape is absolutely fantastic, one of the best audience recordings ever made.
Click here for sound samples courtesy of Black Beauty.

It's a good show. I wouldn't rate it as "must hear" though.

Kind of grows on you - maybe that's an essential quality of the "must hear" shows - they need repetition.

I enjoy this web site and use it often for selection. I hope it gets updated as new sources come in.

It's a GREAT show compared to those two at Knebworth. It's even greater than most of the 77 shows. Definately a must hear.

I just listened to it again. My main issues with this show is that they sound tight and nervous in the first half. Yeah, there's a lot of energy, but it's nervous/anxious energy, especially with Robert and Bonzo. I don't feel like they're really flowing together as a band as a cohesive unit until later in the show. Jimmy and Bonzo give very nice performances at times, but the whole is less than the sum of its parts-- at least to me. Their confidence is low, too. It comes through. Technical proficiency and energy are part of what makes a show good, but there are other factors, too. These other intangibles are lacking in this show as compared to most of the 1977 and 1980 shows.

No Quarter is excellent-- better than any other 1979 version.