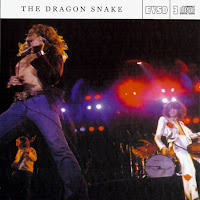 5/21/1977 Houston, TX  The Dragon Snake
The Song Remains the Same, Sick Again, Nobody's Fault But Mine, In My Time of Dying, Since I've Been Loving You, No Quarter, Ten Years Gone, The Battle of Evermore, Going to California, Black Country Woman, Bron-Y-Aur Stomp, White Summer/Black Mountain Side, Kashmir, Over the Top, Achilles Last Stand, Stairway to Heaven, Rock and Roll, Trampled Underfoot
The tape begins with a brief soundcheck before the band launches into The Song Remains the Same. Things get off to a somewhat shaky start as Page's fingers become entangled in the strings during the guitar solos. Bonzo, however, is ready and raring to go, firing off a series of machine gun snare blasts and shouting "pick it up!" as they reach the opening chords of Sick Again. The band gets a bit lost following the third verse. As the song ends, Plant apologizes for the delay, saying "not much time to give you a brief history of the last two years, it's been mostly spent on our backs, so we're just gonna get on and play."
Page very briefly quotes the old Boogie Chillen' riff during the guitar solo in Nobody's Fault But Mine. Bonzo can be heard saying "oh, we're falling apart tonight, ain't we?... did you notice the bolt was comin' out the hi-hat as well there?" following a sluggish In My Time of Dying. Since I've Been Loving You is absolutely fantastic, resembling the versions from the 1973 North American tour. One of the best in recent memory. As the song ends, Bonzo can be heard repeatedly shouting "over the hills!" Plant tells the crowd "this next piece features the uncontrollable bursting talents of John Paul Jones" before No Quarter, adding "the mystery man comes alive!" Jones's piano solo develops into an excellent extended rock 'n roll shuffle cum hard rock jam as Page and Bonzo join in. Bonzo experiments with a vast array of rhythms during the lengthy guitar solo. Page shreds wildly during the outro. As the song ends, Bonzo can be heard shouting "Jimmy!... it's only rock and roll."
Plant introduces Bonzo as "the sort of Joan Baez of Led Zeppelin" before The Battle of Evermore. Going to California is beautiful. Page and Plant hint at Custard Pie while waiting for Jones to retrieve his standup bass prior to Black Country Woman. There is a brief cut in the tape during the initial verses of Bron-Y-Aur Stomp. Bonzo is on fire during a frantic Achilles Last Stand, thrashing wildly at anything within reach. Plant introduces Stairway to Heaven as "a song of continued positivity," adding "we hope." As the band returns to the stage, he tells the crowd "it's been a great night... it's a new hall, we haven't played here before, right?... doesn't seem to matter when there's a lotta people smilin'." Page misses the first few notes of Rock and Roll, apparently due to a fall he took as the song began. The band plods through the show-closing Trampled Underfoot.
The tape is an excellent soundboard recording.
Click here for an audio sample courtesy of Black Beauty.

No way in hell is In My Time Of Dying sluggish at this show.