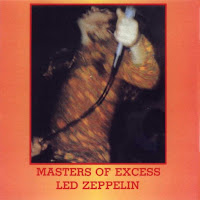 5/28/1969 Boston, MA Masters of Excess
As Long as I Have You, I Can't Quit You Baby, Dazed and Confused, You Shook Me, Pat's Delight, Babe I'm Gonna Leave You, How Many More Times, Communication Breakdown
As Long as I Have You starts with a wah-wah heavy intro. I Can't Quit You Baby is followed by Dazed and Confused. Jones bends the notes of the intro for a jazzy effect. Plant sings a bit of Move on Down the Line during the bow solo. The tape is cut between songs, presumably losing some of Plant's banter with the audience.
The tone of Page's slide intro to You Shook Me is a bit peculiar, but he quickly regains it's familiar grittiness. The audience talks through most of Pat's Delight, occasionally offering whistles and polite applause. Babe I'm Gonna Leave You is haunting and powerful, with Plant giving his all. How Many More Times is a bit sloppy and disjointed. A very loose For Your Love shows up during the first guitar solo. Page experiments with a variety of sounds during an unusual bow solo. Communication Breakdown starts with a bluesy improvisation by Plant, Jones, and Bonzo while Page changes a broken string.
The tape is muddy with very distracting stereo panning/tape warble during As Long as I Have You.

1969-05-19, Boston Tea Party, Boston, MA (From Source)
Volume of this recording is a bit low, but it's not as bad as I thought it was going to be. Little dynamic range and flat sounding, but not as much hiss as there could be. Show kicks of with an extended As Long As I Have You. At times Plant's vocals are very soft, probably because everything else is so loud and the tape just doesn't handle it. I kept finding myself turning this up to try to get a better feel of the show. Listened to this while working, so wasn't paying 100% attention to it, was decent in the background though, and better sounding than I had remembered.

Personally, I think this is the best recorded show for Plant. He is a banshee the whole night. Listen to the scream at the beginning of HMMT. Wow! He tears Communication Breakdown apart as well. Monster screams and wails the whole night.

Hi to everybody, here everyone is sharing such knowledge, so it’s fastidious to see this site, and I used to visit this blog daily.
https://www.travelblog.org/North-America/United-States/blog-1032023.html