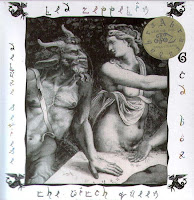 5/14/1973 New Orleans, LA  The Witch Queen
Rock and Roll, Celebration Day, Black Dog, Over the Hills and Far Away, Misty Mountain Hop, Since I've Been Loving You, No Quarter, The Song Remains the Same, The Rain Song, Dazed and Confused, Stairway to Heaven, Moby Dick, Heartbreaker, Whole Lotta Love, Communication Breakdown
The band is full of power and energy as Rock and Roll comes thundering out of the gate. As Black Dog ends, Plant announces "I tell you one thing, we gotta get these lights down... it's pretty pointless, us bringin' our own lights, if we got these things goin' on" adding "Mr. Cole, can you take your dress off and get these lights turned down please?" Someone near the taper shouts "turn off the fuckin' lights!" as Plant attempts to get the crowd to sit down following Over the Hills and Far Away.
Plant starts the second verse of Misty Mountain Hop early before backtracking to catch up with the band. Page is absolutely on fire during a fantastic Since I've Been Loving You. Plant forgets a line during the first verse of No Quarter, mumbling along in an attempt to cover his mistake. The instrumental section is excellent, despite Page's fingers getting a bit sticky during the guitar solo. There is a slight cut in the tape near the end of The Rain Song. Plant introduces Dazed and Confused as "an oldie, but goodie." The band plays a bit of Crossroads prior to another excellent San Francisco interlude during the lead-in to the bow solo. Page shreds through the guitar solo. The workout section is beyond description. A truly ming-blowing performance, one of the best thus far.
Plant announces "I think Jimmy's just bought Bourbon Street" before Stairway to Heaven. Bonzo is introduced as "the drag queen of New Orleans" before Moby Dick. Page misses his cue and comes in a few bars late at the beginning of the song. His fingers get stuck in the strings a bit during the a cappella solo in Heartbreaker. The end of the guitar solo section merges seamlessly with the beginning of Whole Lotta Love. Page blazes through the guitar solo during the Boogie Chillen' section. Plant repeatedly shouts "ain't nothin' but a hound dog!" before unleashing a series of blood-curdling screams during the coda. The band closes the show with an excellent high-energy Communication Breakdown.
The tape is primarily an excellent, three-dimensional audience recording with a few small gaps filled with a rather dry soundboard recording. There is a bit of hiss during the quieter passages.

the s***storm that ensued when the tape was leaked was legendary. Just google the phrase "Freezer's Revenge"

I don't want to take anything away from the actual tape and performance but this thread says VOLUMES about people, and their fanaticism/greed

[url=http://www.thetradersden.org/forums/showthread.php?t=23718]click here for the thread[/url]

You gain one hell of an insight into some of the more unsavoury aspects of the Zeppelin trading community reading those discussions, that's for sure.

I'm pretty sure the guy yelling "Turn off the f--kin' lights!" IS the taper, Freezer. And I can understand how an old school taper like Freezer gets so annoyed with Zep collectors these days. We've been spoiled by the internet. Actual trading means very little to the kids these days...