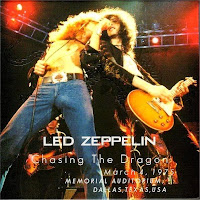 3/4/1975 Dallas, TX  Chasing the Dragon
Rock and Roll, Sick Again, Over the Hills and Far Away, In My Time of Dying, The Song Remains the Same, The Rain Song, Kashmir, No Quarter, Trampled Underfoot, Moby Dick, Dazed and Confused, Stairway to Heaven, Whole Lotta Love, Black Dog
As the tape begins, Bonzo can be heard shouting at the sound man to make the snare drum louder before Rock and Roll crashes into motion. Following Sick Again, Plant asks "Dallas, are you receiving us?... cause if you ain't, we're gonna make sure that you will," promising "some old stuff, some new stuff, and some pretty good stuff." The Song Remains the Same is explosive, despite Page's somewhat sticky fingers. Plant continues to struggle with his voice, unable to keep it under control. Page's playing during The Rain Song is beautiful. The band seems a bit sluggish, plodding through a lackluster Kashmir. As the song ends, a rather obnoxious Plant shouts "why don't you wake up?!" at the unresponsive crowd.
There is a cut in the tape at the beginning of Jones's piano solo during No Quarter which leaves us near the end of the instrumental section. Trampled Underfoot is terribly sloppy, Page's fingers are perpetually entangled in the strings of his guitar. Moby Dick is cut after twelve minutes. Plant introduces Dazed and Confused as "the first thing we really got off on together... apart from chicks." Page shreds erratically through the guitar solo/workout section. Plant jokingly announces "the American return of Fabian" as the band returns to the stage to close the show with Heartbreaker. A rather lazy, uninspired performance.
The tape is an excellent soundboard recording.
Click here for an audio sample courtesy of Black Beauty.

This was my first boot, which I got in the early 90's so I'm biased toward it. Plant sounds a bit drunk during the first part of the show.

This version of OTHFA has one of the best guitar solos with phenominal interaction between Bonham and Page throughout.

Kashmir is interesting, the mellotron is slighly out of tune and the drum flange is very evident, perhaps because of the good sound quality. Abount the 7:20 mark, the band sounds like a travelling musical caravan going through the desert.

Great suff all around!

A really 'off' night. But strangely enough one of the greatest ever OTHAFA!
Could it be the less than animated crowd effected the chaps?

listened to this again thru headphones today and actually really enjoyed it!

There's a reason why this show is very common among Zep live enthusiasts--because it's a really good 75 show. Rock & Roll (except for the audio dip) right into Sick Again is excellent. Over the Hills is outstanding. Trampled Underfoot has a cool keyboard solo, and good guitar work. TSRTS and Rain song are fine. Plant's interaction with audience (and Jones' playful keyboard accompanient) shows their humor. Kashmir is out of tune, and other songs aren't complete (No Quarter, Moby Dick)--get them elewhere. I think the reviewer does this show no justice. Judge for yourself.

I totally agree with the comments on OTHAFA. In spite of it, the overall show is not that good, and I would not recommend it to anyone but a Led Zeppelin fan.

This takes me back to my 19th birthday, I got this 2 record set from TARKL for $20.00. Yeah show could be better but what are you gonna do? I was bummed that it cut out during Moby Dick. Plant does sound wasted during most of the show, Its a good sounding show, and at that time good sounding board tapes were hard to come by.

A beautiful soundboard of the Fort Worth gig (3/3/75) is on Empress Valley. It sounds fantastic and is a great show as well.

You forgot to include Heartbreaker in the setlist.