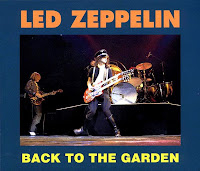 6/7/1977 New York, NY  Back to the Garden
The Song Remains the Same, Sick Again, Nobody's Fault But Mine, In My Time of Dying, Since I've Been Loving You, No Quarter, Ten Years Gone, The Battle of Evermore, Going to California, Black Country Woman, Bron-Y-Aur Stomp, White Summer/Black Mountain Side, Kashmir, Over the Top, Achilles Last Stand, Stairway to Heaven, Rock and Roll
The first show of the band's six night residency at Madison Square Garden begins with a frantic The Song Remains the Same. The taper seems to be having a bit of trouble with his equipment, losing the right channel momentarily. Plant repeatedly exclaims "oh Jimmy!" as Page launches into a blistering sticky-fingered guitar solo. As the song ends, Plant tells the crowd "it's really great to be back, cause we never really knew whether we would ever make it back, y'know?... and I guess now that we have, we better do it good, right?" He insists that the crowd cool it with the firecrackers before dedicating In My Time of Dying to Queen Elizabeth II, in honor of her Silver Jubilee. The band hammers through a devastatingly heavy performance as Plant barks aggressively.
Since I've Been Loving You is an epic drama. Page is absolutely on fire, his fingers tear across the fretboard as he leads the crowd on an emotional journey. Plant is in top form, belting out each line with power and conviction. A fantastic performance, one of the best in recent memory. Someone near the taper can be heard saying "look here, on the roof!... they got a fuckin' Laserium!" as Jones begins his piano solo during No Quarter. There is a slight cut in the tape shortly thereafter. Page and Bonzo join in for another frenzied rendition of Nut Rocker. Page shreds wildly through an excellent guitar solo as Bonzo relentlessly hammers at his drums. Plant introduces Ten Years Gone as "a song about loves lost, but never gone." The crowd cheers loudly as the band begins a beautiful Going to California. The delicate atmosphere is interrupted by a barrage of firecracker blasts following the first verse.
Page and Plant get into a tongue-in-cheek rendition of Rawhide before Black Country Woman. Unfortunately, the latter is cut after just over a minute. The crowd erupts as Kashmir bursts out of White Summer/Black Mountain Side. The band completely loses track of one another during the latter half of the song. There are a couple briefly disturbing speed fluctuations near the beginning of an explosive Achilles Last Stand. Plant dedicates Stairway to Heaven to "the fact that good vibes are alive and well in New York." Page shreds erratically through the guitar solo. Plant exclaims "now let's go back to 1969!" before Whole Lotta Love. The band closes the show with a riotous Rock and Roll, getting caught up in the frenzy and losing track of one another during the guitar solo.
The tape is fairly clear, if a bit noisy in the high end. The encore is quite muffled and distant.
Click here for an audio sample courtesy of Black Beauty.

I was there! As a punky 14 year old.I still remember it like yesterday.First off they came out over an hour late.The Garden was nicknamed the "six day war" because of all the fireworks.VERY rowdy crowd as only a 70's crowd could be.One of the better runs of the erratic 77 tour was June in New York.Lousy sound in the cavernous Garden..No sound check either.BUT 3 hours of the boys was really something to see!

Maybe time to update! Recently discovered stereo SOUNDBOARD of this gig has just surfaced.Sounds great,band in great (for 1977)form.

I love the Achilles, but Page's STH solo is embarrassing! :(

IMO this show sounds a lot better on the audience tape than on the soundboard...heard in such clarity, it's actually a pretty sloppy show at times. The New York shows improved as time went on...