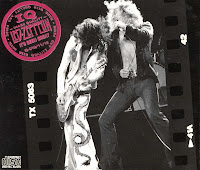 7/23/1977 Oakland, CA  It's Been Great
The Song Remains the Same, Sick Again, Nobody's Fault But Mine, Over the Hills and Far Away, Since I've Been Loving You, No Quarter, Ten Years Gone, The Battle of Evermore, Going to California, Black Country Woman, Bron-Y-Aur Stomp, Trampled Underfoot, White Summer/Black Mountain Side, Kashmir, Achilles Last Stand, Stairway to Heaven, Rock and Roll, Black Dog
What will prove to be the penultimate performance of the 1977 North American tour begins with someone near the taper shouting "this is gonna be great!" as the band takes the stage. Plant greets the crowd, saying "good afternoon... good morning!" before The Song Remains the Same launches into motion. Memories of the disaster in Tempe three nights earlier are still fresh as Page shreds erratically through the guitar solos. Plant's voice is still a bit rough, he has trouble hitting some of the higher notes near the end of Nobody's Fault But Mine. Page's fingers are a bit sticky during the guitar solo. As the song ends, Plant tells the crowd "if we seem to be just a little bit sluggish now... we're just starting to liven up, cause we've only been awake about forty-five minutes," joking "so this is what they call daylight." Since I've Been Loving You is introduced as "a blues for a summer day."
There is a cut in the tape near the beginning of Jones's piano solo during No Quarter. Page is absent for most of the honky tonk breakdown, leaving Jones to vamp alone. His fingers are like razor blades as he slashes and shreds through a disjointed guitar solo. Ten Years Gone is a mess. Page completely destroys the first guitar solo. Plant mentions the band's days at the Winterland while introducing the acoustic set. The beginning of The Battle of Evermore is met with a barrage of firecracker blasts. Going to California is mournfully beautiful. The sound of a passing helicopter introduces White Summer/Black Mountain Side. Bonzo thrashes wildly at anything within reach as the band hammers through a frantic Achilles Last Stand, a devastating performance. Page blazes through a sticky-fingered guitar solo during Stairway to Heaven. As the band returns to the stage, Plant asks the crowd where they're going after the show, joking "can we come?" Rock and Roll is quick and dirty. The band closes the show with a bone-crushing Black Dog. As the song ends, Plant announces "good afternoon, it's been great... it's worth seeing the daylight after all."
The tape is fairly clear, if a bit noisy and hissy.
Click here for an audio sample courtesy of Black Beauty.

A new alternate source for this show has just popped up online...probably the best sounding recording for this show, which is more famous for what happened backstage -Bonham, Peter Grant and Richard Cole stomping one of Bill Graham's employees- than the performance itself.