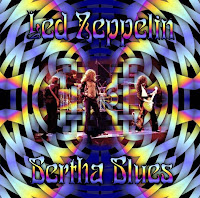 2/16/1975 St. Louis, MO  Bertha Blues
Rock and Roll, Sick Again, Over the Hills and Far Away, In My Time of Dying, The Song Remains the Same, The Rain Song, Kashmir, No Quarter, Trampled Underfoot, Moby Dick, Dazed and Confused, Stairway to Heaven, Whole Lotta Love, Black Dog, Heartbreaker
The show gets off to a somewhat shaky start. Page seems a bit lost at times during Sick Again. As the song ends, Plant apologizes for having to postpone the earlier date, saying "I'm sorry about the last time, but I was on me back in Chicago." In My Time of Dying is excellent. Plant exclaims "happy sunday!" while calling to Jesus. As the song ends, he tells the crowd "it's no good shoutin' for a drumstick, we got hours to do yet." Page's fingers race across the fretboard during a frantic The Song Remains the Same. Kashmir is incredibly powerful.
No Quarter is strong, despite Page's uneven guitar solo. Bonzo is in good form during the instrumental section. As the song ends, Plant announces "it's startin' to cook now!" Page shreds erratically through the guitar solo during Trampled Underfoot. Dazed and Confused is introduced as "a track that came together in the first ten minutes of our rather immaculate conception." Page hints at Train Ket a Rollin' during the lead-in to the bow solo. His fingers get a bit sticky during the guitar solo/workout section, regaining fluency following the call and response with Plant. The song reaches its apex during the hypnotic outro jam.
Before Stairway to Heaven, Plant tells the crowd that the song was conceived "in a moment of true clear light." Page blazes through a fantastic guitar solo. Plant exclaims "Joe Crowley needs love!" during the second verse of Whole Lotta Love. Page's fingers get stuck in the strings during the guitar solo in Black Dog. As the band returns to the stage, Plant announces "John Bonham, the heavy metal kid, takes to the drums." Heartbreaker includes an impromptu rendition of Jimmy Reed's Shame, Shame, Shame following the a cappella solo. As the band leaves the stage, Plant announces "thank you very much indeed, we've had a wonderful night."
The tape is a superb soundboard recording.

I have the Liquid Led version of this and its sounds far better than this remaster.I'd say this is one helluva end for Zeppelin for the end of the first leg of the tour.One of the best Dazed And Confused's from the 75 tour

This is one of my go to shows from 75 after Percy got better. . Feels like a must hear. .

These guys proceeded to go above and beyond for our getting company. Auto Body Repair