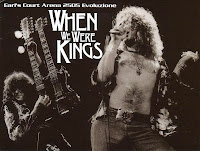 5/25/1975 London, England  When We Were Kings
Rock and Roll, Sick Again, Over the Hills and Far Away, In My Time of Dying, The Song Remains the Same, The Rain Song, Kashmir, No Quarter, Tangerine, Going to California, That's the Way, Bron-Y-Aur Stomp, Trampled Underfoot, Moby Dick, Dazed and Confused, Stairway to Heaven, Whole Lotta Love, Black Dog, Heartbreaker, Communication Breakdown
The band's fifth and final night at Earls Court begins with Alan 'Fluff' Freeman announcing "we are here tonight because you and I have great taste" before Rock and Roll crashes into motion. Page blazes through the second guitar solo in Sick Again. As the song ends, Plant announces "good evening and welcome to the last concert in England for a considerable time." Page shreds frantically through an excellent guitar solo during Over the Hills and Far Away. In My Time of Dying is introduced as "an old work chant." Page solos wildly as Bonzo and Jones pummel the crowd. An incredibly powerful performance, one of the best thus far.
Bonzo is on fire during The Song Remains the Same, thrashing at his drums with wild abandon as Page's fingers race across the fretboard. The Rain Song is absolutely fantastic, one of the best in recent memory. Jones's somber piano solo during No Quarter features hints of Concierto de Aranjuez. The instrumental section is an epic journey. The band receives a thunderous ovation as the piece comes to a close. The climax is reached during the blistering outro. An outstanding performance. Page plays a bit of Tea For One as Plant introduces Tangerine. Going to California is delicately beautiful. Jones's mandolin work is fantastic. Plant makes a few references to Monty Python and the Holy Grail, asking the crowd "what is a shrubbery amongst friends?" before an excellent That's the Way.
The band gets into a bit of Robert Johnson's If I Had Possession Over Judgement Day before Bron-Y-Aur Stomp. Plant gives the crowd a brief history of Johnson's life before introducing Trampled Underfoot. Page shreds erratically through an aggressive guitar solo. Bonzo is introduced as "our blood brother" before a particularly thunderous Moby Dick. Plant says a few kind words about Peter Grant before introducing Dazed and Confused as "the essence of the early Zeppelin." The San Francisco interlude is hauntingly mournful. Plant's ghostly howls echo through the arena. Page's fingers are like razor blades as he slashes and shreds through the frantic guitar solo/workout section. Plant can be heard exclaiming "amen!" off-mic during the call and response section. Page solos wildly during the outro jam. A somewhat uneven final performance of the band's signature song.
Plant dedicates Stairway to Heaven to his daughter Carmen, saying "this is a song to a little girl who sits there, probably wondering what it's all about." Page delivers an excellent guitar solo despite breaking a string near the end. Plant sings the final line in complete silence. As the band returns to the stage, Plant says "is this our swan song, I wonder?" Page hints at Ozone Baby following an excellent funky jam during Whole Lotta Love. Plant unleashes a series of blood-curdling screeches during the violent theramin freakout. Page's fingers get a bit sticky during the extended guitar solo in Black Dog. As the song ends, Plant announces "good citizens of Great Britain, it's been five glorious days... thank you very much for bein' a great audience, and if you see Denis Healey, tell him we've gone."
Plant exclaims "this is somethin' we never do!" as the band returns to the stage once again, joking "any requests?" Page blazes through the fast guitar solo during Heartbreaker. Plant pushes his voice to the limit during the final verse. The band closes the show with an explosive Communication Breakdown. Plant does his best Jamaican accent during a fantastic funky breakdown. As the band leaves the stage for the final time, he announces "thank you very much for showin' us that England is still alive and well." A fantastic finale to 1975. Must hear.
The tape is an excellent soundboard recording, augmented by a fairly clear audience source.

My apologies to those who will disagree, but I think this show (and all of Earl's Court in fact) is overrated. The main plus to this show is the high energy playing. The minuses, however, are some sticky-fingered playing from Jimmy, and Robert's voice being pretty frickin' bad.

I think this is good show, but it (and the other Earl's Court ones) get too much praise for what they are, in my opinion.

Agree with your comments. I'm putting togehter a "best of" personal set from the 5 Earl's Court shows for one complete recording. I navigate the "weaker spots" to find "spot on" songs from Zep's final days live in London, 1975.

Many thanks to YOLZ and other sites for their guidance.

I agree. These show are ok but way over hyped