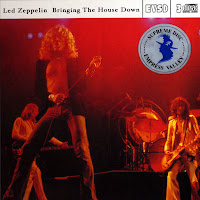 5/26/1977 Landover, MD  Bringing Down the House
The Song Remains the Same, Sick Again, Nobody's Fault But Mine, In My Time of Dying, Since I've Been Loving You, No Quarter, Ten Years Gone, The Battle of Evermore, Going to California, Dancing Days, Black Country Woman, Bron-Y-Aur Stomp, White Summer/Black Mountain Side, Kashmir, Over the Top, Achilles Last Stand, Stairway to Heaven, Rock and Roll
The band is extremely loose as the show gets underway. Page's fingers are a bit sticky during The Song Remains the Same. The band rolls through Sick Again like thick molasses, getting heavier with each refrain. As the song ends, Plant apologizes for the delay, saying "we are extremely sorry, we don't treat it casually or lightly." He tells the crowd "we had such a good time last night, we think we're gonna try and do better tonight" before Nobody's Fault But Mine. In My Time of Dying features the usual You Shook Me tease near the end. Since I've Been Loving You is introduced as "something that comes out of our back yard."
Jones's piano solo during No Quarter is introduced by a series of echo-heavy theramin bursts over Bonzo's rolling tympani. Following a dramatic grand piano interlude, Page and Bonzo join in for an excellent hard rock jam. The three musicians play as one, completely in synch with one another as they create a miniature rock opera. Bonzo takes control and drives the band through the guitar solo section as Page wanders through a somewhat lackluster effort. Plant barks aggressively as Page solos wildly during the song's outro. Before Ten Years Gone, Plant tells the crowd "if you've ever had an affair with a member of the opposite sex, or even a member of the same sex... if this affair seemed very casual to you at one time and then you've walked away, and as the years go by, you realize that it was a lot more than it seemed... then you felt the feeling of lost love, and this is a song about that."
Bonzo is introduced as "Lou Reed's dad" before The Battle of Evermore, which is dedicated to "the good old welsh borders." Plant introduces a beautiful Going to California as "one about a dream that may never come true." His mournful howls echo through the auditorium. Black Country Woman is preceded by an abbreviated acoustic rendition of Dancing Days, its first appearance since 7/13/1973. Plant delivers a strong performance as Bonzo pummels his drums in a series of thunderous fills during Kashmir. The crowd goes wild as a marathon thirty-five minute Over the Top comes to a close, the longest drum solo ever recorded. The band is a bit disjointed during a sloppy Achilles Last Stand. Bonzo comes in early, creating a strange new arrangement of the song's introduction. Plant dedicates Stairway to Heaven to "all that is positive and good and we can hope for." Bonzo sounds almost bored as Page delivers an uninspired guitar solo. The band closes the show with a tired run-through of Rock and Roll. The recording ends with the tapers of the audience source interviewing passers-by on their way out of the arena.
The tape is an excellent soundboard recording, augmented by a fairly clear audience recording.
Click here for an audio sample courtesy of Black Beauty.