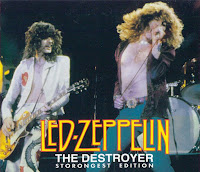 4/28/1977 Cleveland, OH  The Destroyer: Storongest Edition
The Song Remains the Same, Sick Again, Nobody's Fault But Mine, In My Time of Dying, Since I've Been Loving You, No Quarter, Ten Years Gone, The Battle of Evermore, Going to California, Black Country Woman, Bron-Y-Aur Stomp, White Summer/Black Mountain Side, Kashmir, Over the Top, Achilles Last Stand, Stairway to Heaven, Rock and Roll, Trampled Underfoot
The band's second night in Cleveland begins with a brief soundcheck before The Song Remains the Same comes thundering out of the gate. Sick Again is incredibly heavy. The stadium quakes under the power of Bonzo and Jones's bone-crushing rhythm as Page tears through the guitar solos. As the song ends, the taper can be heard shouting "oh fuck!" and "my god, we're in trouble!" There is a loud piercing squeal as Plant begins speaking, followed by a cut which leaves us at the beginning of Nobody's Fault But Mine. Plant exclaims "oh Jimmy!" as Page begins a blistering guitar solo.
There is a slight cut in the tape following Plant's aggressive shouts of "oh Georgina!" during an excellent In My Time of Dying. He and Bonzo get into a bit of Surrender as the song ends. Since I've Been Loving You is an epic drama. Page is absolutely on fire as he leads the band on an intense emotional journey. Bonzo pummels the crowd with a devastating stampede of drums as the frenzy reaches its peak. A truly amazing performance, one of the best thus far. Plant introduces No Quarter as "No Quaalude." Jones's piano solo features another frantic rendition of Nut Rocker, followed by an excellent blues interlude. Page delivers a dramatic guitar solo. An outstanding performance. Unfortunately, the song is cut during the final verse.
Ten Years Gone is absolutely fantastic. Plant hints at Dancing Days and Bob Dylan's Blues before Black Country Woman, which features his best Elvis impression. The crowd erupts as White Summer/Black Mountain Side gives way to a powerful Kashmir. Plant's aggressive howls echo over the crowd and into infinity. The taper exclaims "this sucks!" twelve minutes into Over the Top. Bonzo hammers at his drums with incredible intensity during Achilles Last Stand. The very beginning of Stairway to Heaven is missing from the tape. The taper can be heard saying "oh fuck" directly into the microphone during the initial verses. Page's epic guitar solo is dynamic and emotional. Bonzo thrashes wildly at anything within reach as the drama reaches its peak. An amazing performance. Unfortunately, the latter half of the song suffers from a series of minor tape issues.
As the band returns to the stage, Plant announces "there's still life in the old dog yet." The taper can once again be heard exclaiming "oh fuck!" as a chest-thumping Rock and Roll comes to a close. The band closes the show with a plodding Trampled Underfoot. A somewhat sluggish finale to an outstanding performance. Must hear.
The tape is clear and well-balanced, if a bit distant and noisy in the high end at times. Unfortunately, the majority of Plant's between song banter is missing from the tape.

This concert has what may be the most somber and dark version of Achilles' Last Stand. It may be my favorite version. Great performance by Plant, touched with lament and beautiful improvisations by Page. The rest of the concert is great, too, of course-- among the very best of 1977.

Amazing show, definitely one of the best of the whole tour (Maybe a few of the LA shows are better, but that's it!). Also, any of you guys listen to the second source that came out pretty recently? Not quite as good quality but fills the gaps nicely.

Check out the new soundboard of this show. Cool show, No cuts or tape issues. It's been my go to show for '77 for about a month now :)