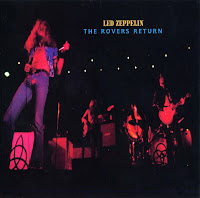 12/8/1972 Manchester, England The Rovers Return
Rock and Roll, Over the Hills and Far Away, Black Dog, Misty Mountain Hop, Since I've Been Loving You, Dancing Days, Bron-Y-Aur Stomp, The Song Remains the Same, The Rain Song, Dazed and Confused, Stairway to Heaven, Whole Lotta Love, Heartbreaker, Immigrant Song, Communication Breakdown
Plant is regaining control of his voice, belting out the verses with power and bravado during Rock and Roll. Black Dog is brutally heavy. Page shreds through the guitar solo. Plant forgets some lyrics during the first verse of Misty Mountain Hop. Page is on fire during an epic Since I've Been Loving You. A truly powerful performance, one of the best in recent memory. Before Dancing Days, Plant comments on the English music press's fondness for the song. After a long pause, Bron-Y-Aur Stomp begins with a loud hum of feedback from Jones's bass.
Page's fingers fly across the fretboard during an excellent The Song Remains the Same. The Rain Song is fantastic, the perfect balance of delicate beauty and thunderous attack. As shouted requests continue to pour in from the crowd, Plant jokes "it really doesn't matter, we're gonna carry on with Bill Fury numbers all night" before Dazed and Confused. The lead-in to the bow solo features a great heavy jam with Bonzo thrashing violently at anything within reach before a particularly heavy iteration of the San Francisco interlude. The guitar solo/workout section is an explosion of raw energy lead by Page's lightning-fast soloing. The outro is drenched in wah-wah as Plant's screeches and howls echo out over the crowd. An amazing performance.
Stairway to Heaven is plagued by feedback during the verse before Bonzo enters. Page blazes through an excellent guitar solo as Bonzo holds down a martial rhythm. Plant introduces Whole Lotta Love as "a song that really typifies everything that we do during our hobby time." Page leads the band in a jam on a funky riff before the theramin freakout. With a machine gun snare burst, Bonzo triggers the thunderous explosion of the Everybody Needs Somebody to Love section. The band gets into a funky It's Your Thing breakdown before the guitar solo break. Plant skips the usual boogie rap, heading straight into a riotous rendition of John Lee Hooker's Bottle Up and Go. Page, Jones, and Bonzo jam on a bluesy rhythm as Plant struggles to get the boogie back on track. The medley proper includes Boogie Chillen', a raucous rendition of Gene Vincent's Say Mama, Elvis Presley's Let's Have a Party, I Can't Quit You Baby, and Goin' Down Slow after a cut in the tape. As the band leaves the stage, Plant tells the crowd "thank you very much, we've had a very silly time."
Page gets Jones and Bonzo into a high-speed jam in the middle of the a cappella solo during Heartbreaker. He blazes through a lightning-fast guitar solo. The final verse is utterly explosive. Plant introduces Immigrant Song as "a song that's taken all over the world, even Bangcock." The band closes the show with a quick and dirty Communication Breakdown. A devastatingly heavy performance. Must hear.
The tape is clear and well-balanced, if a bit noisy in the higher frequencies.
Click here for audio samples courtesy of Black Beauty.

This is a fantastic show, so-so recording. Not too bad, but the tape fluctuations are a bit irritating. The band, however, sounds fantastic and Plant sounds much improved over the recent Japan tour. Dancing days, TSRTS and the Rain song are all great and D&C and WLL are near perfect. One of the last great shows before Plant's high-pitched wails became a thing of the past

I like this show, too. Plant voice is near tops for the UK tour, but he was still in better shape in the Japanese tour, overall. In this show, you hear him straining a lot. It's like he's pushing his voice to the point just before it would crack. So he has better control than on most shows in the Japanese tour, but his range here is generally lower (except for maybe the 3rd and 4th nights). Also, the recording has a really atmospheric bass-heavy sound which I think is great.