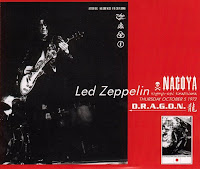 10/5/1972 Nagoya, Japan D.R.A.G.O.N.
Rock and Roll, Black Dog, Misty Mountain Hop, Since I've Been Loving You, Dancing Days, Bron-Y-Aur Stomp, The Song Remains the Same, The Rain Song, Dazed and Confused, Stairway to Heaven, Whole Lotta Love, Thank You
The crowd is eerily quiet during Black Dog save for a few whistlers, giving the impression that the band is alone in the room. Plant announces "it is very nice for English boys to be in Nagoya" before Misty Mountain Hop. Since I've Been Loving You is a bit of a disjointed mess. Plant's introduction of Bonzo draws a big cheer from the crowd before Bron-Y-Aur Stomp. The Song Remains the Same is once again introduced as "The Overture." Plant's voice is at its weakest, seemingly unable to sustain any note. The Rain Song is beautiful.
The intro of Dazed and Confused is drenched in wah-wah. The lead-in to the bow solo includes a great funky jam. Page throws some As Long as I Have You licks into his call and response with Plant during the excellent guitar solo/workout section. He solos frantically during the outro. The Everybody Needs Somebody to Love section during Whole Lotta Love is a riotous explosion. Plant has finally warmed up and it shows in his enthusiastic performance during the medley. A frenzied Boogie Chillen', which features some great new lyrics from Plant, is followed by Elvis Presley's Let's Have a Party and You Shook Me, which includes another fantastic blues improvisation. Thank You is preceded by a highly dramatic organ suite from Jones, which includes a rendition of Sakura. Page delivers an epic guitar solo. The recording ends with a simple "goodnight Nagoya" from Plant.
The tape is fairly clear, if a bit distant and hissy. Thank You is from an inferior source with a very tinny sound.
Click here for audio samples courtesy of Black Beauty.