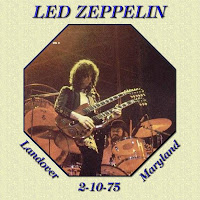 Rock and Roll, Sick Again, Over the Hills and Far Away, In My Time of Dying, The Song Remains the Same, The Rain Song, Kashmir, No Quarter, Trampled Underfoot, Moby Dick, Dazed and Confused, Stairway to Heaven, Black Dog, Heartbreaker

As the tape begins, someone near the taper can be heard saying "they're gonna cut out a lot of the old songs." Plant's voice starts out a bit rough, but it doesn't hurt his enthusiasm. Page shreds through an aggressive guitar solo during Over the Hills and Far Away. Plant asks the crowd if they've heard any of the new songs on the radio before an explosive In My Time of Dying. There are a few brief tape disturbances during The Song Remains the Same. Before Kashmir, Plant tells the crowd "this features the magical mystical fingers of John Paul Jones," joking "it coulda been Liberace." There is a brief cut at the very beginning of the song.

No Quarter features another excellent, dynamic guitar solo from Page. Unfortunately, there are some tape issues near the end of the instrumental section. Trampled Underfoot  is a bit disjointed at times. Before Moby Dick, Plant announces "ladies and gentlemen... direct from Monty Python's Flying Circus... our percussionist... not Karen Carpenter, but John Bonham!" When asked what he thinks of the show so far, one of the taper's friends comments "it's good... it's a little long," to which the taper responds "couldn't be long enough, man."

The crowd erupts as Plant announces the band's intention to "take things right back to the beginning" prior to Dazed and Confused. Plant's ethereal howls echo through the arena during the haunting San Francisco interlude. There is a slight cut during the string-slapping section of the bow solo. Page's fingers race across the fretboard at lightning speed during the frantic guitar solo/workout section. The ever-expanding outro is an epic drama. Black Dog is devastatingly heavy. There is a slight cut during the final verse. The crowd goes wild as the band returns to the stage to close the show with Heartbreaker. The guitar solo section is a frenzied explosion of energy. Unfortunately, the tape speeds up during the final verse.

The tape is a bit noisy and lacking in bottom end.

Two minutes of 8mm color footage from the show is available on Hercules's Film Noir Vol. 1 (although not listed on the menu). The footage, which features several clips of Heartbreaker, is shot from close to the stage, but is a bit blurry and quite fragmentary. The footage ends with the studio version of Trampled Underfoot over a series of handmade credits.

Click here for a video sample courtesy of Black Beauty.

Just revisited this show and was pretty amazed actually, performance wise it goes into my top 5 of 75. Dazed is fantastic!

The sound quality of this tape is awful. The performance is SOLID up to "No Quarter" then it becomes one of THOSE 1975 Performances from NQ to the end the playing is inspired. Even Moby Dick (which by this time started to drag IMO) was not boring. Throughout the tape there are moments where it sounds like the heads were eating the tape, the sound gets scrunched and at one poiint just goes out completely

1. Rock and Roll-good start, even Plant takes risks by shredding what little vocal chords he has.

2. Sick Again-Plant sings it different not hitting too many high notes, there is some feedback toward the end

3. Plant says that this is a song about a dream. Tape glitches will mar recording from this point on.

4. IMTOD-SRTS-Rain Song-Kashmir-good versions, during the Rain Song you can hear comments about how the sound in the venue sucks and that the arena is too big.

5. No Quarter-comments of how they did it so good last time they were here. The concert performance goes from solid to excellent from this point on. Too bad the sound quality sucks. As soon as NQ jam ends you can hear someone in the audience say "Oh they are gonna do Dazed and Confused." Same clown starts saying "Stairway" after every song. Thank you captain obvious.

7. Dazed-end-performance is stellar once again the tape is so lousy that a soundboard would be most welcome

now available as a soundboard tape.