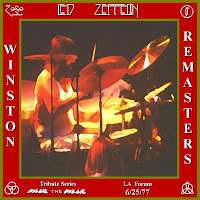 6/25/1977 Los Angeles, CA  Mike the Mike
The Song Remains the Same, Sick Again, Nobody's Fault But Mine, In My Time of Dying, Since I've Been Loving You, No Quarter, Ten Years Gone, The Battle of Evermore, Going to California, Black Country Woman, Bron-Y-Aur Stomp, White Summer/Black Mountain Side, Kashmir, Trampled Underfoot, Over the Top, Achilles Last Stand, Stairway to Heaven, Communication Breakdown
The band returns for their fourth night at The Forum and it's evident that some of the initial frenzy has worn off as the show gets underway. Page's playing is very loose during The Song Remains the Same, almost to a fault at times. Plant once again mentions the Badge Holders before Nobody's Fault But Mine. Page shreds wildly through an excellent guitar solo. As the song ends, Plant tells the crowd "we intend to try and put as much gusto as possible into a saturday night for ya." The band's final performance of In My Time of Dying features a short impromptu rendition of Rip it Up during Plant's "oh my Jesus" break. Page is on fire during a powerful Since I've Been Loving You, his fingers tear across the fretboard in a furious cascade of notes during the guitar solo. No Quarter features an excellent blues improvisation during Jones's piano solo. Page blazes through an epic guitar solo.
A woman near the taper can be heard shouting "and did you know that it is against the law to rock and roll in the United States of America?" as The Battle of Evermore comes to a close. Plant introduces Going to California as "the search for the Badge Holder." The walls of the arena quake under the power of Bonzo's thunderous fills near the end of Kashmir. The band hammers through an aggressive Trampled Underfoot, which is dedicated to Robert Johnson. Page shreds through a somewhat erratic guitar solo. Bonzo is introduced as "the mainstay of the whole driving force behind sleeping with Led Zeppelin" before a marathon Over the Top. The band pummels the crowd with a frantic Achilles Last Stand. Plant hints at Communication Breakdown before Stairway to Heaven, which features an amazing guitar solo from Page. As the band returns to the stage, Plant announces "Led Zeppelin salutes a permanent Badge Holder" after greeting groupie Lori Maddox. Whole Lotta Love is preceded by a funky intro. The band closes the show with an explosive Communication Breakdown, its first and only appearance in 1977.
The tape is yet another excellent Mike Millard recording. Very clear and well-balanced, if a bit hissy at times.
Click here for audio samples courtesy of Black Beauty.

Cannot believe no comments on this performance. Sure, it is more loose and relaxed than Eddie or Badge Holders, but that only adds to the mystique and this show's place in the 77 LA collective. Jimmy's definitely "on" for this one; just give a listen to No Quarter, Ten Years Gone, and Stairway - maybe the best of the 6 nights. This is a great concert to just put on and listen to, all 3 and one-half hours, in all the Mike Millard glory. My version is the Scorpio 3 CD set and the sound is utterly fantastic!

You may also want to find out about the principle types of CNC machinery and the kind of work it could possibly} do to see if it could possibly} meet your wants. BAE Systems’ Austin workers innovate for a wide range|a variety} of packages within the areas of autonomy, cyber, and sensor growth. The traditional advantages Womens Winter Hats of 3D printing—such as saving money and time, and enjoying greater design freedom and materials flexibility—appeal to harness assemblers as a lot as other producers.