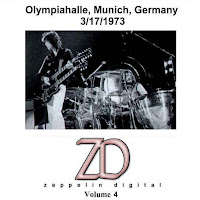 3/17/1973 Munich, Germany Zeppelin Digital Vol. 4
Rock and Roll, Over the Hills and Far Away, Black Dog, Misty Mountain Hop, Since I've Been Loving You, Dancing Days, Bron-Y-Aur Stomp, The Song Remains the Same, The Rain Song, Dazed and Confused, Stairway to Heaven, Whole Lotta Love, Heartbreaker
The tape begins with a stage announcement in german about upcoming shows at the venue. Page blazes through the guitar solo during Over the Hills and Far Away. The band is extremely tight and powerful tonight. As the song ends, Plant tells the crowd "we're gonna endeavor to have a good time here" adding "last time I saw this place, there was a lady from Russia doin' some very good things." Page is on fire during an incredibly powerful Since I've Been Loving You. Before Bron-Y-Aur Stomp, Plant tells the crowd "this song was written in a state of alcoholic meditation on the mountainsides of Wales." Pages fingers fly across the fretboard with lightning-fast precision during The Song Remains the Same. The Rain Song is absolutely beautiful, despite Plant's weak voice. Bonzo hammers at his drums with amazing intensity during the heavy section.
The initial verses of Dazed and Confused are accented by Bonzo's inspired improvisation. Page solos wildly as Plant's ethereal moans cascade over the crowd during the lead-in to the bow solo. Page's frenzied guitar solo builds in intensity, culminating in an explosive stop-start battle with Bonzo. The call and response section is preceded by a jazzy interlude. Page blazes through an excellent guitar solo during Stairway to Heaven. Before Whole Lotta Love, Plant mocks the crowd's shouted requests for the song. The Everybody Needs Somebody to Love section is a cacophonous explosion of energy with Bonzo thrashing wildly at anything within reach. The medley includes Boogie Chillen', Elvis Presley's (You're So Square) Baby I Don't Care, which Plant starts early, causing a bit of confused hesitation, Let's Have a Party, I Can't Quit You Baby, The Lemon Song, and Goin' Down Slow. The band closes the show with an excellent Heartbreaker. The guitar solo is preceded by a fantastic funky dialogue between Page and Bonzo.
The tape is very clear and well-balanced.

This is a fantastic show and the WLL medley is a killer!! Probably the best tour the boys ever embarked on. .