3/21/1970 Vancouver, British Columbia  (5th gen>cdr)
We're Gonna Groove, Heartbreaker, Since I've Been Loving You, Thank You, What is and What Should Never Be, Whole Lotta Love, Communication Breakdown
Plant wails like a banshee during We're Gonna Groove, pushing his voice to the limit. Bonzo attacks his drums full force. Page's fingers fly wildly across the fretboard during the solos in Heartbreaker. The North American premiere of Since I've Been Loving You is bluesy and soulful. Plant's voice is a bit rough at times. Whole Lotta Love is missing the theramin freakout. A quick and dirty Communication Breakdown includes Plant wailing a few lines from Ramble On and People during the breakdown.
The tape is an excellent radio broadcast.
*UPDATE 3/24/08* 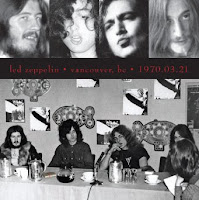 3/21/1970 Vancouver, British Columbia  (master cassette)
We're Gonna Groove, I Can't Quit You Baby, Dazed and Confused, Heartbreaker
The newly-discovered audience recording of the famous Mudslide show begins with a brief band introduction. Plant asks the crowd if they feel alright before the band jumps into We're Gonna Groove. There tape is cut after the second verse as well as during the guitar solo, which leads us to Plant's wailing intro to I Can't Quit You Baby. Page blazes through an excellent guitar solo. Someone near the taper shouts "turn off those bloody lights!" during a quiet passage. During the final verse, someone says "wanna get stoned?" directly into the taper's microphone. There is a slight cut during the outro.
There are some speed fluctuations during the eerie intro to Dazed and Confused. Another slight cut leaves us in the first verse. Plant chants "do what you wanna do" during the lead-in to the bow solo (which sees more speed fluctuations throughout) only to shout "why don't you sit down... let the people see!" during his call and response with Page. There is another slight cut near the end of the bow solo. During the guitar solo, there is a brief clip of an acoustic guitar recorded over the show. The song is cut during the outro. An excellent, high energy performance. Plant again asks the crowd to consider those behind them and sit down before Heartbreaker, which is preceded by a C'mon Everybody-esque intro from Page. The solos are absolutely electric. The recording ends just as the final verse begins.
The tape is muffled with a fair amount of hiss, but enjoyable as a historical document.
Click here for audio samples courtesy of Black Beauty.

1970-03-21, Vancouver, Canada "Mudslide" (Flying Disc)
A Valentine treat, a pretty clean soundboard/fm broadcast, though not complete. Seems like the broadcast focused on the shorter songs, skipping over anything that would have stretched out. The order seems a bit off too, but can't complain about the sound. Show starts with Heartbreaker, then goes into a quick organ solo before Thank You. What Is and What Should Never Be is next, follwed by the band ripping thru Communication Breakdown, with Plant singing "Gonna Ramble On... Ramble On..." during part of it. We're Gonna Groove is next, followed by Since I've Been Loving You. The show wraps up with Heartbreaker.

Great sound, somewhat restricted listen because of the setlist. The Flying Disc release seems to be from an LP along the way, with a few pops and clicks, while the 5th gen source I have doesn't have these, but does run fast and sharp, to my ears anyway.

This is a great show from 1970 and it's a surprisingly clear recording from that time. While it appears that this is a fragment of a larger show, the versions of We're gonna groove and especially, Since I've been loving you are fantastic. Perhaps the best SIBLY ever. This is an awesome recording of the whole band, but Plant is on fire here!

SIBLY alone makes this a must here they never do it any better that i can recall. After hearing this performance other versions of SIBLY are barely recognizable as the same song plant was inspired to be sure