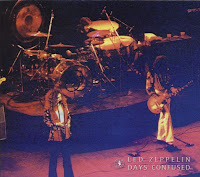 3/5/1975 Dallas, TX  Days Confused
Rock and Roll, Sick Again, Over the Hills and Far Away, In My Time of Dying, The Song Remains the Same, The Rain Song, Kashmir, No Quarter, Trampled Underfoot, Moby Dick, Dazed and Confused, Stairway to Heaven, Whole Lotta Love, Black Dog
The show gets off to a somewhat sluggish start. Page's fingers are a bit sticky during the guitar solo in Rock and Roll. Plant's voice still sounds tired. Before The Song Remains the Same, he tells the crowd "the decadent, capitalist hippies have been running around the world, sewing their wild oats and havin' a really good time... and on our travels we found that things ain't really as bad as all that." Bonzo can be heard shouting "gimme more bass drum!" as The Rain Song ends. Plant hints at When the Levee Breaks before introducing a powerful Kashmir as "a track about a journey through the east."
The beginning of Jones's piano solo during No Quarter is accented by a series of ethereal howls from Page's theramin. The ever-expanding instrumental section features a laid back guitar solo from Page. Bonzo is introduced as "one of the most robust, strongest men without a leotard in show business... the man who can go for hours without stopping, but is a lousy lay" before an epic Moby Dick. Plant asks the crowd "what ever happened to the butter queen?" joking "she got cheap and got margarine instead" prior to Dazed and Confused, which he introduces as "one of the very, very first ones... when we were just infants in the game of rock." Page shreds erratically through the guitar solo/workout section, each note slashing through the frantic rhythm like a jagged razor blade.
Stairway to Heaven features an excellent, dynamic guitar solo, despite Page's sticky fingers. As the song ends, Plant announces "on behalf of Woman's Weekly, we'd like to bid you goodnight." The theramin freakout during Whole Lotta Love is preceded by the first appearance of The Crunge with lyrics. Black Dog is a bit sloppy, Page seems unable to keep up with the rest of the band at times. As the band leaves the stage, Plant announces "John Bonham, John Paul Jones, Jimmy Page... and Fred Astaire." A lackluster second night in Dallas.
The tape is another excellent soundboard recording.
Click here for audio samples courtesy of Black Beauty.

3/5/1975 should be listened to repeatedly and at absolutely top volume. A smoking gig from begining to end. Even "Moby Dick". The first night pales in comparison.