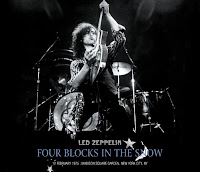 Rock and Roll, Sick Again, Over the Hills and Far Away, In My Time of Dying, The Song Remains the Same, The Rain Song, Kashmir, No Quarter, Trampled Underfoot, Moby Dick, Dazed and Confused, Stairway to Heaven, Black Dog, Heartbreaker

The band's third and final night at Madison Square Garden begins with a brief soundcheck, even Plant attempts to warm up his sore voice. Page blazes through the guitar solo near the end of Sick Again. As the song ends, Plant tells the crowd "we came four blocks in the snow to get here," adding "isn't it good though, it snows?... doesn't it change the vibe of the city?... I think it's great." In My Time of Dying is excellent. The band is on fire during The Song Remains the Same. Page shreds wildly through the guitar solos with amazing precision as Bonzo and Jones race along at top speed. The Rain Song is absolutely fantastic, one of the best in recent memory.

Kashmir sounds like an army marching into battle. A mesmerizing performance, the best thus far. No Quarter is introduced as featuring "the impeccably clean fingernails of John Paul Jones... the man who made Monty Python's Flying Circus a flop in New York." Page delivers a dramatically erratic guitar solo. Jones somehow ends up in a different key at the end of the instrumental section. As the song ends, Plant tells the crowd "I told you we intend to have a good time." Page shreds frantically through the guitar solo during Trampled Underfoot. Before Moby Dick, Plant announces "ladies and gentlemen, at this point in the evening we wanna feature one of the finest percussionists that Led Zeppelin's ever had... the bowler-hatted wonder... the man who made constipation passé, John Bonham!"

Dazed and Confused is introduced as "the immaculate conception." Page's fingers get a bit sticky during the lead-in to the bow solo. The San Francisco interlude is brilliant. After blazing through an explosive entrance to the guitar solo/workout section, Page breaks a string, leaving Plant to improvise a brief vocal solo. The instrumental machinery is in full-swing, led by Page's wild soloing. He even gets into the riff from Walter's Walk for the first time since 1/7/1973. The Mars, the Bringer of War section is followed by an amazing stop-start jam. The epic journey reaches its climax with the phenomenal outro jam. A truly mind-blowing performance, one of the best thus far.

Page tears through the guitar solo during Black Dog. Plant hints at You Shook Me before the show-closing Heartbreaker. The walls of the arena quake under the power of Bonzo's thunderous fills during the initial verses. The a cappella solo is followed by an impromptu rendition of That's All Right. Page shreds through the frenzied guitar solo section. As the band leaves the stage, Plant announces "ladies and gentlemen of New York, you're too much... and we ain't so bad ourselves." An unbelievable performance. Must hear.

The tape is an outstanding matrix of audience and soundboard recordings, fit for an official release.

Probably my favourite Boot - agree that it should have been released instead of SRTS!

Can you imagine being there and hearing Kashmir in person. It sounds incredible. Great site. I find it incredibly useful.

Hands down the best show from 1975,better than Seattle and Earls Court.Killer versions of IMTOD,NQ,Kashmir,D&C.Get the Its Aright New York version,the recording is the best soundboard boot from Zepp,kills TSRTS.in my top 3 shows.