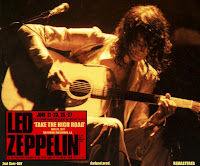 6/26/1977 Los Angeles, CA  Take the High Road
The Song Remains the Same*, Sick Again, Nobody's Fault But Mine, Over the Hills and Far Away, Since I've Been Loving You, No Quarter, Ten Years Gone, The Battle of Evermore, Going to California, That's All Right, Black Country Woman, Bron-Y-Aur Stomp, White Summer/Black Mountain Side, Kashmir, Over the Top, Achilles Last Stand, Stairway to Heaven, It'll Be Me
*- It'll Be Me (TDOLZ)
The tape begins with a brief soundcheck, followed by an excited holler from the taper as Page launches into The Song Remains the Same. Plant barks aggressively as the band hammers through a brutal Sick Again. Page shreds through a blistering guitar solo during Nobody's Fault But Mine. As the song ends, Plant asks the crowd if they're familiar with Badge Holders, explaining "to be a Badge Holder is to be someone's loved one and to hold a badge." Over the Hills and Far Away is dedicated to Richard Cole, "who hasn't got a Badge Holder." Page tears through a wild, spaced-out guitar solo as Bonzo and Jones explore a funky groove. Since I've Been Loving You is an intense emotional journey, introduced as "a blues for Badge Holders."
Jones's piano solo develops into an excellent blues shuffle as Page and Bonzo join in during No Quarter. The band is absolutely on fire as Page blazes through a fantastically epic guitar solo. He shreds wildly through the song's explosive outro. An amazing performance. The band gets into an excellent impromptu rendition of That's All Right prior to Black Country Woman. Page wanders through a seemingly endless, twenty-two minute White Summer/Black Mountain Side, the longest ever. Plant delivers a strong performance during a thunderous Kashmir, belting out each line with power and bravado. Only the intro and outro of Over the Top survive on the tape, cutting out the majority of the drum solo. Page's experimental guitar solo is unbearably long, stretching well beyond twenty minutes in length.
The band pummels the crowd during a frantic Achilles Last Stand. Bonzo thrashes at his drums with incredible intensity as Page shreds wildly through the guitar solos. The combined sonic assault threatens to destroy the taper's equipment. An utterly devastating performance. Stairway to Heaven features an outstanding guitar solo from Page. His fingers race across the fretboard in an endless cascade of notes as the band slowly builds to an explosive climax. A fantastic performance, one of the best in recent memory. Plant tells the crowd "we're gonna try something off the new album that's coming out in about, um... in a period of time," adding "yes, we're actually gonna record again" before the band closes the show with a riotous rendition of Jerry Lee Lewis's It'll Be Me. As the song ends, Plant announces "thank you LA, twenty-five past midnight, goodnight!"
The tape is fairly clear, if a bit distant and boomy.
Click here for audio samples courtesy of Black Beauty.

probably this is the best show of LA gigs. unfortunately Mike wasn't there...

Listening to this right now, great performance, so-so tape. I haven't gotten to the dadgad version which I assume is probably better than TDOLZ's "It'll Be Me". For a detailed review of the release I suggest you all go to "Collectors Music Reviews" I may do an addendum to this review once I finish listening.

Well I have finished listening to this concert. I think this is a criminally overlooked tape because of the classics like "Eddie" "Badgeholders" and 6/25. The TDOLZ version leaves allot to be desired, but as I said before it is a boomy tape. When even the noise solo is not boring you know this is a good one. This concert needs to be re-visited and re released.

I think the tape you have repeats a large section of White Summer/Black Mountain Side. I've seen other versions of this show with the track clocking in at around 11 minutes or so.

41 years on. . The week of LA 77 is the greatest residency any band ever undertook. . Thank the heavens for those with the recorders. .