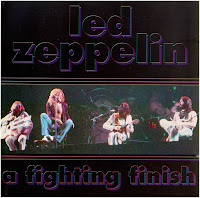 7/24/1977 Oakland, CA  A Fighting Finish
The Song Remains the Same, Sick Again, Nobody's Fault But Mine, Over the Hills and Far Away, Since I've Been Loving You, No Quarter, Ten Years Gone, The Battle of Evermore, Going to California, Mystery Train, Black Country Woman, Bron-Y-Aur Stomp, Trampled Underfoot, White Summer/Black Mountain Side, Kashmir, Achilles Last Stand, Stairway to Heaven, Rock and Roll
Another beautiful summer afternoon greets the band as they return for their second show at Oakland Coliseum. Page and Plant are still a bit rusty as The Song Remains the Same gets underway. There is a slight cut during the initial verses. The band completely loses track of one another at the end of Sick Again. As the song ends, Plant thanks Bill Graham, saying "I think he built the place especially for rock concerts." Page shreds through a blistering guitar solo during Nobody's Fault But Mine. The tape is cut between songs, missing the first few notes of the intro to Over the Hills and Far Away. Since I've Been Loving You is violently emotional. There is a slight cut in the middle of Jones's piano solo during No Quarter. The band skips the upbeat interlude, instead heading directly into Page's erratic guitar solo. Things become a bit disjointed during the outro. Ten Years Gone is introduced as "a song about the first love, the one that you left behind that you can never quite reach back to."
Black Country Woman is preceded by a fantastic impromptu rendition of Mystery Train. Bron-Y-Aur Stomp features a short bass solo before the guitar breakdown. The band hammers through an aggressive Trampled Underfoot, which Plant introduces as a song that "refers to the careful looking after of an automobile." Page shreds wildly through the guitar solo. Kashmir is a bit dull and uninspired, despite Plant's enthusiastic delivery. The beginning of Page's experimental guitar solo is missing from the tape, picking up just before the bow section. Achilles Last Stand is a frantic explosion of energy. Bonzo misses his cue for the big fill near the end of the song, causing a moment of confused hesitation. Page blazes through an outstanding guitar solo during Stairway to Heaven. As the band leaves the stage following a quick and nasty Rock and Roll, Plant announces "thanks a lot folks, see ya again!" Unfortunately, the rest of the tour would be cancelled when Plant's son Karac died suddenly two days later, making this the band's final performance in America. The end of an era.
The tape is fairly clear and well-balanced, if a bit noisy and overloaded at times. It seems to run a bit fast as well.
Click here for an audio sample courtesy of Black Beauty.

So in your opinion, which of the two final American gigs is the best one?

They're roughly equal, although that isn't saying much. There are plenty of other '77 performances I'd recommend before bothering with these two.

The recent compilation from 2 sources separates the wheat from the chaff, as they say. There is no longer any debate, this 7-24-1977 show now holds the spotlight it so richly deserves, last performance in the U.S. and all the backstage Bonzo, Richard Cole and Peter Grant's son "history". It is now complete, minus 5 or 6 seconds at the intro of "Evermore", and in brilliant remastered sound quality.

Players can evaluate all the options of the slot in demo mode. A low deposit feature can also be|can be} available to gamers to familiarize themselves with the options of the slot machine. Tennis Champions considered one of the|is amongst the|is doubtless one of the} best low-stakes tennis bonus 카지노 사이트 slots. It is a total sport of probability, and bets are based mostly on which two bins will win. The aim is to guess which field the joker will land in from a pack of cards.