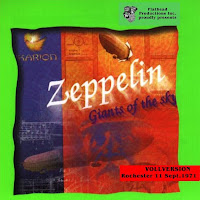 9/11/1971 Rochester, NY Giants of the Sky
Immigrant Song, Heartbreaker, Since I've Been Loving You, Black Dog, Stairway to Heaven, Celebration Day, That's the Way, Going to California, What is and What Should Never Be, Moby Dick, Whole Lotta Love, Thank You
Plant is in good form during Immigrant Song, full of power. Since I've Been Loving You is dramatic and powerful. Plant forgets to sing the a cappella "ah, ah..." bit after the third verse in Black Dog, causing the band to get lost before the guitar solo. After several tense moments of uncertainty, they manage to right themselves and finish the song.* After a cut in the tape, we're left in the middle of the guitar solo in Stairway to Heaven.
Plant introduces a frenzied Celebration Day as "something from New York City... a place not too far away from here." He tries in vain to get the crowd to sit down and be quiet before That's the Way. Before Going to California, Plant jokes that donations for the man helping people over the barrier can be left on the stage. After Moby Dick, Plant tells the crowd to focus all of their vibes toward the earth in hopes of eliminating pollution through positive energy. Whole Lotta Love is preceded by a great frantic jam. The medley features an excellent Hello Mary Lou, Elvis Presley's A Mess of Blues, and You Shook Me. The show ends with another great performance of Thank You.
The tape is a combination of at least two sources, both fairly muddy and noisy.
*- a fragment of Dazed and Confused is included after Black Dog, but is actually from 3/17/1975.