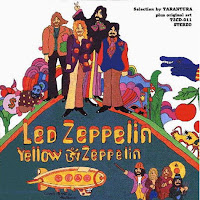 2/14/1969 Miami, FL Yellow Zeppelin
Train Kept a Rollin', I Can't Quit You Baby, Dazed and Confused, Killing Floor, Babe I'm Gonna Leave You, How Many More Times, White Summer/Black Mountain Side, As Long as I Have You, You Shook Me, Pat's Delight
The energy is very high during Train Kept a Rollin', Plant especially seems to be very into it. Page is in good form during I Can't Quit You Baby, repeating licks until they sound just how he wants them to. Plant introduces Dazed and Confused as "a thing off the album, that's currently doing pretty well, apparently." Plant sings a line from Sugartime just as Page is finishing the bow solo.
Page is again repeating licks ad nauseam during Killing Floor to hypnotizing effect. Plant sings a bit of Walter Davis's I Think You Need a Shot, ending with the line "I want you to roll over baby, see what it's like on the other side." The band breaks into a funky jam just before the final guitar solo. Plant's voice is on the brink of breaking from the strain during Babe I'm Gonna Leave You. Page duels with both Plant and Bonzo in the middle of How Many More Times before a funky Roll Over Beethoven jam. Unfortunately, there is a cut in the tape during the bow solo, leaving us without the end of the song.
There is chatter coming from the audience during White Summer/Black Mountain Side. A high energy version of As Long as I Have You starts with an erratic guitar intro. Plant is screaming wildly, improvising lyrics about "Detroit city." Another duel has Plant squealing before Bonzo and Jones join in for a full band battle. Plant loses himself in the outro and has to stop to regain his composure before finishing the song. Plant is shredding his voice during You Shook Me, almost losing it completely by the end of the song. Bonzo is introduced as "a friend of Che Guevara" before Pat's Delight finishes the recording.
The tape is somewhat noisy with Page and Plant in front and Bonzo being buried under Page's guitar. Despite this, it is an enjoyable listen.

1969-02-14, The Image Club, Miami, FL (dadgad prod.)
What a hissy tape. Listened to the first half (from Train Kept A Rollin to Babe I'm Gonna Leave You) while jogging, then listened to the rest while working. The music was fairly balanced but everything was hard to hear because there was just so much hiss. Ignoring the hiss, if you can, the performance sounds good. The taper paused the tape between most songs, so most of Plant's chats with the crowd is missing. Sounds like How Many More Times might be cut a bit at the end, or it might have been wrapping up, not quite sure, seemed somewhat abrupt. Early versions of White Summer - Black Mountain Side never cease to amaze me. About the only thing that compares these days is Joe Bonamassa's "Woke Up Dreaming" which he really rips thru live. Listening to these early shows, I've grown to really like "As Long As I Have You". Not an awful show to listen to, but shame the quality wasn't a bit better.

Think I hear a little bit of Howlin' Wolf's "You'll Be Mine," if only a couple of lines.

The quality of your blogs and conjointly the articles and price appreciating.Manhattan haircut

The problem is that you provide may be worth our time and also effort.
https://www.tastefulspace.com/blog/2019/03/23/best-cheap-things-to-do-in-miami-fl/

Purchased as a gift for my father. He has used one similar for years...years. He just needed a new one. It was exactly what he was needing, a Good quality braun series 8 electric shaver, arrived on time. I would recommend this product and seller.