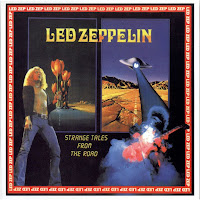 4/9/1977 Chicago, IL  Strange Tales From the Road (dadgad)
The Song Remains the Same, Sick Again, Nobody's Fault But Mine, Since I've Been Loving You, No Quarter, Ten Years Gone
The band's third night in Chicago starts off like any other night. Page's fingers are a bit sticky during The Song Remains the Same. Plant greets the crowd following Sick Again, saying "welcome to what we hope is gonna be a very good time." Page plays a large portion of the intro to Since I've Been Loving You a cappella before realizing he's jumped ahead of the setlist. He shreds erratically though the guitar solo in Nobody's Fault But Mine. The tape is cut between songs. Jones's ominous piano solo during No Quarter is met with a series of loud whistles from the crowd. A barrage of firecracker blasts signals the beginning of the instrumental section. Page solos wildly during the song's outro.
After a long pause following a lackluster Ten Years Gone, Plant announces "whether you were aware of it or not, Jimmy has got a bout of gastroenteritis... so we're gonna take a necessary five minute break right now, so you must bear with us, cause Jimmy's very lucky to be even playin' tonight, okay?" After a cut in the tape, road manager Richard Cole announces "(Jimmy) has a bad attack of gastroenteritis, he does not want to do a half-assed show tonight... if you watch the press and the papers on monday and hang onto your ticket stubs, this show will be rescheduled and all your tickets will be re-honored!" adding "the band feel very bad about this, but please hang onto your tickets and they will all be rescheduled for the next performance, and they'll come back and replay this show again." Unfortunately, the makeup show would never take place.
The tape is distant and noisy.