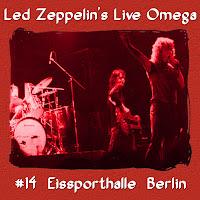 7/7/1980 Berlin, Germany Live Omega
Train Kept a Rollin', Nobody's Fault But Mine, Black Dog, In the Evening, The Rain Song, Hot Dog, All My Love, Trampled Underfoot, Since I've Been Loving You, White Summer/Black Mountain Side, Kashmir, Stairway to Heaven, Rock and Roll, Whole Lotta Love
The last show of the tour and Led Zeppelin's final performance in its original form begins with the familiar opening chords of Train Kept a Rollin', the same song that opened the band's first recorded concert in Spokane eleven and a half years earlier. Plant exclaims "now rock it, rock it, rock!" as Page tears into a blistering guitar solo. The band pounds through a thunderous Black Dog, which is once again introduced as "a number from the annals of rock history." Plant barks aggressively through In the Evening. Page's fingers are a bit sticky during a somewhat lackluster performance of The Rain Song. As the song ends, Plant tells the crowd "this is the last concert, so... we intend to have a better time now perhaps than we have done before." Hot Dog is introduced as "a song for Texas." Page stumbles through a sticky-fingered guitar solo as the band hammers through an extended Trampled Underfoot.
Achilles Last Stand has been inexplicably dropped from the setlist, leaving Page to stall the crowd while his guitar is being tuned before White Summer/Black Mountain Side. His fingers become hopelessly entangled in the strings throughout the song. Plant delivers a powerful performance during Kashmir. The crowd erupts as Stairway to Heaven begins. Page's fingers are a bit sticky as he wanders through an epic guitar solo, the longest ever. Plant asks the crowd "anything in particular?" before the band launches into an explosive Rock and Roll. The crowd goes wild as Page tears into the show-closing Whole Lotta Love. The theremin freakout has been transformed into an extended free-form jam. Bonzo and Jones hammer through a frantic rhythm as Page creates a symphony of dissonant howls. Plant pushes his voice to the limit during the song's thunderous finale. The crowd is left begging for more as the band leaves the stage for the last time ever. Two and a half months later, the tragic death of John Bonham on September 25, 1980 would effectively put an end to the greatest rock band of all time. The end of an era.
The tape is an excellent soundboard recording, briefly augmented by an audience source.

You've managed to hear every zep show in its original form in one year!!!!, now THAT's Amazing!!!

This bootleg always makes me very sad. It's like, well, this is where the Hindenburg finally crashed, this is when Rock And Roll died, when the Song would never remain the same, when the levees finally began to break.

Worst version of "White Summer" ever! Longest version of "STH", "Trampeled", and "WLL" get this show for those three songs alone.

What the Parrot Saw said...

Just discovered your blog, and I'm looking forward to reading it all! You write well, and your feel for Zep's on-stage nuances is solid.

Listening to Berlin right now- I agree with Luis Rey re: WLL. Really interesting version, unlike anything else even on the tour, I think.

I love your blog.Listen to Jimmy's solo in Stairway to Heaven.Jimmy reinvents it again.It is my one of my favorite Stairway solos if not my favorite.It was almost as if he knew it was the end.

Page sounds stoned for most of the show, suffering from a noticeable loss of fluency in his playing. That said, there are two gems in this show that I would highly recommend: SIBLY and WLL. SIBLY is played with more spontaneity than probably any version from this tour and than most versions in 1977. That's the way it should have been played! They kind of lost it in post-1975 live versions, in my opinion. The WLL improvisation really comes out of nowhere and is outstanding. One is reminded of the potential that these four still had, in spite of all the drug/alcohol problems that were plaguing Page and Bonzo at the time. A somewhat worthy mention for this show is White Summer/Black Mountainside. In spite of Jimmy's sloppy and mistake-ridden playing, he manages to pull together occasional passages that are quite beautiful. As for the rest of the show-- it's pretty forgettable. STH? Yes, the solo is long. That doesn't mean it's good! LOL. Check out the two Manheim shows if you want to hear a good STH solo from this tour.

I was a Army medic stationed in Berlin back in July of 1980, and this concert wasn't on 7-7-80. It was suppose to be on that day but the concert was postponed for a week until 7-14-1980. Jimmy Page didn't seem to be into it. He sat for a lot of the show. He was really hung up on heroin at the time.

^^^^ Maybe it was you that was postponed because anyone who knows anything about live LZ knows their last show was July 7th 1980 in Berlin. .Dont be a troll Greg. .

Anyone who was there knows it was postponed for a week. I didn't just read a date on the album cover,, I was there! OK?