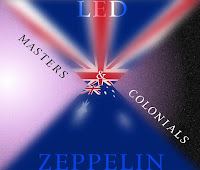 12/16/1972 Birmingham, England Masters & Colonials
Rock and Roll, Over the Hills and Far Away, Black Dog, Misty Mountain Hop, Since I've Been Loving You, Dancing Days, Bron-Y-Aur Stomp, The Song Remains the Same, The Rain Song, Dazed and Confused, Stairway to Heaven, Whole Lotta Love, Heartbreaker
There is a slight dropout at the beginning of Rock and Roll as the taper quickly adjusts his levels in response to the suddenly overwhelming wall of sound. Page shreds through the guitar solo during Over the Hills and Far Away. His playing is restrained during a very loose Since I've Been Loving You. Plant introduces a rather sloppy Dancing Days as a song "about a summer day when everything's nice and warm... and you haven't got the problems like Misty Mountain Hop." The band's playing seems drunk during The Song Remains the Same and The Rain Song. There is some tape garble during the final verse of the latter.
Dazed and Confused is introduced as "one from when we were young men." Page leads the band in a heavy jam before a brief cut and some tape issues interrupt the San Francisco interlude. Page, Jones, and Bonzo get a bit disjointed at times during the guitar solo/workout section. There are a few speed fluctuations throughout Stairway to Heaven, which features an excellent guitar solo from Page. Whole Lotta Love is dedicated to the band's publicist BP Fallon. Plant gets into his best Solomon Burke impression during a riotous Everybody Needs Somebody to Love. The medley includes Boogie Chillen', Elvis Presley's Let's Have a Party, a fantastic Heartbreak Hotel, an excellent I Can't Quit You Baby, and Goin' Down Slow. An inspired performance, the highlight of the show. Page blazes through the solos during Heartbreaker, which closes the show.
The tape is fairly clear, if a bit distant and hissy.