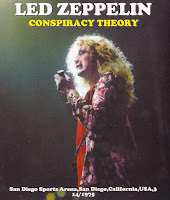 3/14/1975 San Diego, CA  Conspiracy Theory
Rock and Roll, Sick Again, Over the Hills and Far Away, In My Time of Dying, The Song Remains the Same, The Rain Song, Kashmir, No Quarter, Trampled Underfoot, Moby Dick, Dazed and Confused, Stairway to Heaven, Heartbreaker
Bonzo fires off a series of machine gun snare blasts as Page shreds erratically through the guitar solo during Over the Hills and Far Away. The song's outro includes a brief reference to White Summer. Plant's voice is surprisingly strong during a blistering In My Time of Dying, one of the best thus far. As the song ends, Plant tells the crowd "this has the makings of bein' a very good, hot concert... the two constituents that make things a real trip are you and us, so this is our turn to give you a good buzz."
Jones's Mellotron begins to act up toward the end of The Rain Song. No Quarter is introduced as a song "for the Conquistadors." The instrumental section is an epic marathon. The guitar solo gets off to an uneven start, but the band finishes strong with Bonzo in particular delivering a standout performance. Page's fingers become entangled in the strings during the guitar solo in Trampled Underfoot. Bonzo is introduced as "one of the finest trombone players that America's ever known" as Page fiddles with some White Summer licks before Moby Dick.
Plant tells the crowd "the whole impetuous [sic] of the group was formed around the fact that we could pull off a tune like the one we're gonna give you now" prior to Dazed and Confused. The Woodstock interlude is hauntingly beautiful. Page's fingers are a bit sticky during the erratic guitar solo/workout section. The climax is reached during the frantic outro jam. Stairway to Heaven features excellent interplay between Page and Bonzo during the guitar solo. Plant, Bonzo, and Jones improvise a brief funky interlude during the guitar solo section in Heartbreaker when Page disappears momentarily. As the band leaves the stage, Plant announces "it's been a fantastic evening, even the security have enjoyed it!" A somewhat uneven performance with a few moments of inspiration.
The tape is another excellent soundboard recording.

The 2nd date in San Diego in 4 days (after 2 gigs in Long Beach up north, added late?), and much sloppier as you say, not only does the theremin not cooperate, but Page seem to lose the plot on many solos throughout.

But Plant seems much warmer and relaxed, a nice vibe from early '75.

I really like this show. It took them a while, but they finally hit their stride around the 3/11/75 show. After that, each show is really good to great with some of Page's best ever shredding. Well done