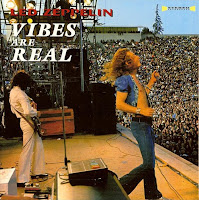 6/2/1973 San Francisco, CA  (master>dat>cdr)
Rock and Roll, Celebration Day, Black Dog, Over the Hills and Far Away, Misty Mountain Hop, Since I've Been Loving You, No Quarter, The Song Remains the Same, The Rain Song, Dazed and Confused, Stairway to Heaven, Moby Dick*, Heartbreaker*, Whole Lotta Love*, Communication Breakdown*, The Ocean*
*- sbd: Vibes are Real
As the band takes the stage, Plant greets the crowd, saying "good afternoon... as we've been awake now a total of about two and a half hours, it doesn't really seem that we should be doin' what we're doin' right now... but I believe there's somethin' to do with lightness and darkness, so we'll try a bit of lightness." Following a pause to fix some equipment issues, Rock and Roll comes crashing through the gate. Bonzo is like an out of control locomotive, hammering at his drums with incredible force. His thunderous bass drum echoes like cannon fire through the stadium. Page blazes through the guitar solo during Over the Hills and Far Away. The laid-back intensity of Since I've Been Loving You is followed by an excellent No Quarter.
Following a brief rant about negative press, Plant dedicates The Song Remains the Same to "the musical papers who think we should remain a blues band." The end of The Rain Song is destroyed by a loud hum of feedback, which Plant apologizes for as the song ends, saying "it really blew it, it could have been a lot nicer without it." Page, Jones, and Bonzo are locked into each other during the frantic lead-in to the bow solo in Dazed and Confused. Plant moans "I believe in the theory" during the haunting San Francisco interlude. Page shreds through the somewhat erratic guitar solo/workout section. Before Stairway to Heaven, Plant mentions Roy Harper, saying "to show our faith in him and his work that has influenced us... we offer this song." Page's fingers dance across the fretboard during the guitar solo.
Following an epic thirty-minute Moby Dick, Heartbreaker rumbles into motion with Bonzo's thunderous intro. Bonzo and Jones hold down a high-speed funky groove as Page performs his wizardry during the theramin freakout in Whole Lotta Love. The Boogie Chillen' section features an excellent guitar solo from Page. Following a blistering Communication Breakdown, Plant tells the crowd "let me tell you, you been fantastic!" joking "next time we come, bring your friends." The band returns to the stage following a backstage water fight to close the show with an excellent The Ocean. As the band exits, Plant tells the crowd "I gotta tell you, this is the best vibes since the first time we played the Fillmore five years ago." A truly momentous occasion for all. Must hear.
The audience tape is very clear and well-balanced. The soundboard tape is fantastic.
About two minutes of color footage from the show is available on Hercules's Film Noir Vol. 1, as well as Celebration's Latter Visions. Unfortunately, the film only contains a thirty second fragment of Rock and Roll shot from the left side of the stage, showing only Page and Plant. The rest of the footage features various brief shots of the crowd.
Click here for a video sample courtesy of Black Beauty.

I highly recommend this title, even the drum solo which clocks in at 30+ minutes is a great listen. My favorite selection is "Heart Breaker".