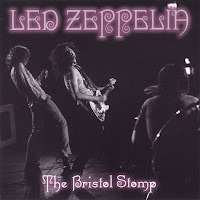 1/8/1970 Bristol, England  The Bristol Stomp
We're Gonna Groove, I Can't Quit You Baby, Dazed and Confused, Heartbreaker, White Summer/Black Mountain Side, Since I've Been Loving You, Thank You, Moby Dick, How Many More Times, Whole Lotta Love, Communication Breakdown
The tape begins during the first appearance of We're Gonna Groove, but you wouldn't know it by listening. The tape is very muffled and noisy, making it difficult to tell what's going on. The sound clears up a bit as I Can't Quit You Baby gets underway. There are some tape dropouts during the guitar solo in another epic Dazed and Confused, but nothing too distracting.
The crowd goes wild when Plant introduces Heartbreaker. The band is in full swing, playing every note with intensity. White Summer/Black Mountain Side is followed by the first appearance of Since I've Been Loving You, nine months before the release of Led Zeppelin III (although Plant says it will be out in three). The arrangement is much looser than the album version, with Plant singing alternate lyrics, but the dynamic tension remains intact. The first appearance of Thank You is preceded by an organ solo from Jones and features an excellent guitar solo by Page.
Only the first two minutes of Moby Dick survive before the tape cuts to Plant's introduction of How Many More Times. Page is introduced as "Jimmy 'Hoochie Coochie' Page." He solos frantically during the Bolero section. The crowd goes wild as Plant squeezes his lemon during the medley. The first appearance of Whole Lotta Love since Led Zeppelin II was released (now with the theramin freakout intact) is met with a loud cheer from the crowd. Plant has them echoing his wails of "woman!" repeatedly. In a twist on their former show opener, Communication Breakdown closes the show and features a bit of Good Times Bad Times during the breakdown. Welcome to 1970.
The tape is muffled, noisy, and distant with some hiss. Luckily, the next night will provide quite a different listening experience.
Click here for an audio sample courtesy of Black Beauty.

1970-01-08, Colston Hall, Bristol, UK "The Bristol Stomp" (No Label)
Rough sound, distorted, filled with tape hiss, little dynamic range... but as they say, on with the show. The tape starts off with We're Gonna Groove already going. Interestingly, this is a song that will not surface on an official release until Coda, a dozen or so years later. Next song up is I Can't Quit You Baby ... and the tape gets a touch cleaner. Dazed and Confused is next, and sounds strong, there are a few tape glitches near the end, but nothing too major. Heartbreaker and then White Summer follow. The first appearance of Since I've Been Loving You is next, a song that will be released later in the year on the third album, and sounds similar to the final product. Thank You makes it's debut in the recorded live tapes, at time it sounds a bit sloppy, but it might just be because they haven't played it often live. Moby Dick is next, but most of it is missing. This is followed by the outro of How Many More Times, Whole Lotta Love, and Communication Breakdown. The crowd gets rather worked up during How Many More Times. Even when the sound cleans up a bit, it's still not very good, with Plant distant in the sound.