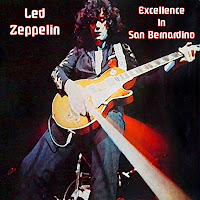 6/22/1972 San Bernardino, CA Excellence in San Bernardino
Immigrant Song, Heartbreaker, Black Dog, Since I've Been Loving You, Stairway to Heaven, Going to California, That's the Way, Tangerine, Bron-Y-Aur Stomp, Dazed and Confused, What is and What Should Never Be, Moby Dick, Whole Lotta Love, Rock and Roll
The tape begins with the familiar deep droning intro as someone near the taper repeatedly shouts "we're ready!" Plant's Valhalla cries are almost nonexistent during the initial verses of Immigrant Song. Page solos wildly during the lead-in to an exceptional a cappella solo in Heartbreaker. Plant sounds tired while introducing Since I've Been Loving You as "a song of distressed love." Page plays in extremes, quiet and restrained one moment, wild and dramatic the next. His epic soloing paints a vast emotional landscape.
Plant introduces Going to California as "a song about experiences." Page is barely audible over the chattering crowd during Tangerine. Bron-Y-Aur Stomp is introduced as "something for everybody with a loud mouth in the audience." There is a tape speedup/cut two minutes into the song. Page's fingers fly across the fretboard as Bonzo and Jones hold down a funky rhythm until everything slows down for an ethereal intro to the bow solo during Dazed and Confused. The guitar solo/workout section is an explosion of energy with Page's high-flying acrobatics leading the way. Plant encourages the crowd to "do The Crunge!", adding seductively "c'mon you white folk sisters..."
A firecracker explosion just before What is and What Should Never Be is dismissed as "greasy kid's stuff" by Plant. Bonzo is introduced as "the gentleman... you've all been waiting for, ever since this rodeo started... our percussionist... one hundred and sixty-eight pounds... John Henry Bonham" as Page quietly jams on a bluesy riff before Moby Dick. The medley during Whole Lotta Love includes Boogie Chillen', Elvis Presley's Let's Have a Party, Hello Mary Lou, and Goin' Down Slow, with Page unleashing a flurry of wild licks during the extended blues improvisation. As the band returns to the stage to close the show with Rock and Roll, Plant announces "it's very nice to be back again." A fairly standard performance with Page providing most of the excitement.
The tape is very clear with Page and Plant in front.
About three minutes of excellent color footage featuring fragments of Immigrant Song, Heartbreaker, Black Dog, Stairway to Heaven, Dazed and Confused, and Whole Lotta Love is available on Hercules's Film Noir Vol. 1. The film, which focuses primarily on Page, is shot from close to the stage and is very clear and enjoyable. The footage is also available on Celebration's Early Visions, but is not properly synched on that release.
Click here for a video sample courtesy of Black Beauty.

loved this boot, the only bone I have to pick though is the slight chuckles from the audience when page drops in some greensleeves in heartbreaker...whats so funny about that? I always find it irritating to listen to, anyways enough of my rant, I give this show 8/10. By the way I love this blog, its like the best guide to getting into bootlegs, thanks man.

Thanks for reading! I'm glad you're finding it useful.

I recently got the Winston Remaster of this show, then remastered it again myself, in order to get rid of the awful cackling girl's laughter from throughout this concert, most notably irritating during the acoustic set. Why in the holy Hell would the taper go to such 1972 extremes for taping quality, just to have it all ruined by this girl's insane cackling laughter, over and over and over? Was he just trying to get her naked after the show? Who knows, but by editing that out, this becomes a real nice performance for two reasons: 1 - Jimmy Page is en fuego, playing the electric guitar like a man possessed (just give a listen to Dazed and Confused), and 2 - the concert is captured (minus cackling girl) in stunning quality for 1972. The taper had to be down very close to the stage. Amazing Peter Grant didn't find him!