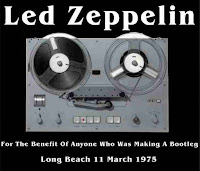 3/11/1975 Long Beach, CA
For the Benefit of Anyone Who Was Making a Bootleg
Rock and Roll, Sick Again, Over the Hills and Far Away, In My Time of Dying, The Song Remains the Same, The Rain Song, Kashmir, No Quarter, Trampled Underfoot, Moby Dick, Dazed and Confused, Stairway to Heaven, Whole Lotta Love, Black Dog
The first of the legendary Mike Millard recordings, the tape begins with a stage announcement asking those behind the stage to stay in their seats, assuring them they will have a good view of the band now that the house lights are down. Plant gets a bit lost during the second verse of Rock and Roll. Page's guitar cuts out for a moment at the beginning of Sick Again. As the song ends, Plant tells the crowd "we must apologize for the slight delay, but we couldn't get into the building," joking "we haven't got any tickets." In My Time of Dying is incredibly powerful, if a bit sloppy at times.
The Song Remains the Same is introduced as "a song that you definitely will have heard before, unless you've had your ears shut for two and a half years." The Rain Song is beautiful. As the song ends, Plant announces "for the benefit of anyone who was makin' a bootleg then, the twelve string was out of tune during Song Remains the Same." He delivers a strong performance during an excellent Kashmir. Jones is introduced as "a complete Pakistani orchestra, all in one pool player." No Quarter is absolutely fantastic. Jones's haunting piano solo is introduced by a series of ghostly moans from the theramin. Page's wandering guitar solo slowly builds tension until an explosive climax during the song's outro. An excellent performance, one of the best thus far.
Page shreds wildly through the guitar solo during an aggressive Trampled Underfoot. As the song ends, Plant tells the crowd "Jimmy just broke two strings and John Bonham is just about to have a hernia." He dedicates Moby Dick to "the Chateua Marmont and the Continental Hyatt House and all the places where there's cockroaches on the floor" before introducing Bonzo as "Mr. Dynamo! Mr. Cockstarch! John Bonham!" Someone near the taper can be heard shouting "c'mon Henry!" during the marathon drum solo. Bonzo shouts into one of his drum mics during the finale.
Page is absolutely on fire during the guitar solo/workout section in Dazed and Confused, shredding wildly as Bonzo and Jones race along at a frantic pace. The return to the main riff is explosive, triggered by Bonzo's machine gun snare blasts. The hypnotic outro is punctuated by a thunderous finale. An outstanding performance. A particularly funky theramin freakout during Whole Lotta Love is preceded by another haphazard rendition of The Crunge. Page blazes through the extended guitar solo during the show-closing Black Dog. As the song ends, Plant announces "ladies and gentlemen of Long Beach, goodnight... sleep well, half a Quaalude with water." An excellent performance.
The tape is a superb audience recording, so perfectly captured it could be mistaken for a soundboard tape.

EVSD released the sbd of this concert, but it runs too fast. Seek out the DADGAD version which corrects this error! Performance wise I wish they had a SBD of the following night!

Does the Millard tape run at the correct speed? The audience tapes ive heard of this show always run very fast

What an amazing show!. . I had to check TYOLZ to find out if this was a SBD. I forgot this show was the beginning of the MM tapes. .Amazing recording. .NQ is a killer:)

I was at this show and have the MM tape. Fantastic keepsake.