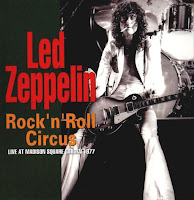 6/10/1977 New York, NY  Rock 'n Roll Circus
The Song Remains the Same, Sick Again, Nobody's Fault But Mine, Over the Hills and Far Away, Since I've Been Loving You, No Quarter, Ten Years Gone, The Battle of Evermore, Going to California, Black Country Woman, Bron-Y-Aur Stomp, White Summer/Black Mountain Side, Kashmir, Over the Top, Heartbreaker, Achilles Last Stand, Stairway to Heaven, Rock and Roll
The tape begins with a barrage of firecracker blasts as the band takes the stage. The Song Remains the Same is a riotous explosion of energy. A loud air horn siren signals the beginning of an incredibly heavy Sick Again. The walls of the arena quake under the power of Bonzo's thunderous pounding as Page shreds wildly through the guitar solos. As the song ends, Plant greets the crowd, extending "a special good evening to our friends from Wales." Page blazes through an excellent guitar solo during Nobody's Fault But Mine. Plant introduces "a song that might come as a surprise for the people in the second row who've been here a couple of nights" before the first appearance of Over the Hills and Far Away since 5/25/1975.
There is a slight cut in the tape during Jones's piano solo in No Quarter, just before Page and Bonzo join in for an upbeat rock 'n roll jam. Page delivers a fantastic guitar solo during the epic instrumental section. Plant jokingly refers to Jones as "the young lady in the group" before The Battle of Evermore. Going to California is introduced as "a song about what happens when you get over the misty mountain." Unfortunately, the delicate atmosphere is interrupted by the restless rumblings of a rowdy crowd. The beginning of Black Country Woman is missing from the tape. Page hints at Dancing Days briefly during Bron-Y-Aur Stomp. Plant barks aggressively during a thunderous Kashmir. Bonzo is introduced as "a man who'd spit in your eye before he'd say hello" before Over the Top.
The biggest surprise of the night is the first appearance of Heartbreaker since 5/25/1975. Page shreds erratically as Bonzo hammers at his drums with incredible intensity during the guitar solo section. The experimental guitar solo before Achilles Last Stand continues to expand in both length and complexity with Page creating vast sonic landscapes of electronic noise. Achilles Last Stand is a frantic cacophony, Page is out of tune for most of the song. The crowd erupts as Stairway to Heaven begins. Plant tells the crowd "tonight's about good vibes" as the band returns to the stage. The explosive introduction of Rock and Roll threatens to destroy the taper's equipment. Unfortunately, the recording ends during Page's guitar solo.
The tape is fairly clear, if a bit distant and boomy.
Click here for audio samples courtesy of Black Beauty.

There was some talk about this Heartbreaker at R-O last week, isn't it breathtaking?
birdoffire

I was there and yes there was...
Too bad the recording doesn't do the performance any justice.
Still...nice to have. Might break out my cassette recording tonight.

Hey there — any chance you still have your recording from that night?