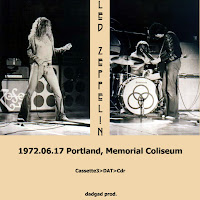 6/17/1972 Portland, OR  (cassette3>dat>cdr)
Stairway to Heaven, Going to California, That's the Way, Tangerine, Bron-Y-Aur Stomp, Dazed and Confused, What is and What Should Never Be, Moby Dick, Whole Lotta Love, Rock and Roll
The tape begins during the guitar solo in Stairway to Heaven. The final verse is cut after Plant sings the first line. He comments on a regulation that's keeping the house lights on before attempting to calm the crowd for the acoustic set. Plant is in good form, hitting some great high notes while chanting "it ain't right!" near the end of That's the Way. He introduces Bron-Y-Aur Stomp as "a song about a blue-eyed dog... the best friend I ever had." Unfortunately, the middle of the song is missing.
Dazed and Confused is introduced as "one from a long, long time ago." The lead-in to the bow solo includes a slow, haunting jam. There is a cut near the beginning of the bow solo, as well as a few during the guitar solo/workout section. Plant introduces Bonzo as "our one hundred and eighty pound wonder" before Moby Dick. The medley during Whole Lotta Love includes Boogie Chillen', Carl Perkins's Boppin' the Blues, Hello Mary Lou, and an extended Goin' Down Slow. The recording ends with a thunderous Rock and Roll.
The tape is quite muffled, distorted, and hissy.

Probably the best concert in Zeppelin history. You will not hear Plant in better form post 1970. Page rises to the level of his bandmate by playing to a madness level.

He messed up his voice maybe in the Vancouver 1971 show (of which we sadly don't have a recording). By the first show in LA (08/22/71), he's hoarse and he pushes his voice way too far that night and damages it further. The rest of the tour, he struggles to hit the highest notes, and he starts avoiding them (e.g. SIBLY, end of Stairway, Black Dog).

It's not really until the winter UK 71 tour that he's had a chance to thoroughly rest his voice. But... he gets sick like a dog on that tour (I've heard). That said, in 11/24/71 Manchester, he sings extremely well for that era-- almost back to a pre-U.S. 71 level.

In early 1972, the very top of his range is still giving him problems, in general. That said, he does a pretty nice job in some of the later Aussie/NZ shows.

By the start of the U.S. tour in 1972, you can hear his voice clearly starting to crack at strange times, like on lower notes when he doesn't put enough breath behind it. (As we all know, this problem will get worse and worse, causing him to get vocal surgery after the U.S. tour in 1973.)

I think his singing in Portland was good probably because he just did two nights in NYC, in which his voice was cracking left and right, and in which he couldn't sustain or hit most of the high notes. Who knows? Maybe some friends of his who saw the concerts made comments to him about it. Thus, he rested for a couple of days, slept well, and may have been out to prove himself.

Also, LA 06/25/72 has some outstanding singing from him for this tour.

Portland 06/17/72 has, admittedly, one of Plant's best nights in 1972. There are plenty of shows before 08/22/71 in which Plant sings better or even much better. After August 1971, these are the shows in which Plant sings with better range, quality, and control than in Portland:

Amsterdam shows some excellent range at times, but his voice cracks a bit too much for my liking.

As for my favorite 1972 Plant show, LA 1972 takes the cake. His voice is clear and pristine and cracks very little. That was really his last hurrah as a singer in that style.

Okay, I just got done listening to some of those shows again. While his voice is definitely a bit better in 11/24/71 Manchester than in Portland, his performance in the Aussie/NZ shows is (in my opinion) not quite as good as in Portland. (You can hear it especially on Dazed and Confused and WLL.) Now if you wanna compare Portland and 06/25/72 LA, I think you could argue either way, especially since the first part of the Portland show is missing.