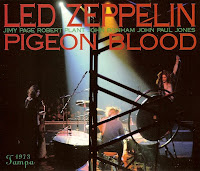 5/5/1973 Tampa, FL Pigeon Blood
Rock and Roll, Celebration Day, Black Dog, Over the Hills and Far Away, Misty Mountain Hop, Since I've Been Loving You, No Quarter, The Song Remains the Same, The Rain Song, Dazed and Confused, Stairway to Heaven, Moby Dick, Heartbreaker, Whole Lotta Love, The Ocean, Communication Breakdown
The first recording of the band's record-breaking 1973 North American tour begins with an announcer saying simply "ladies and gentlemen, what more can I say... Led Zeppelin." As the band performs a brief soundcheck, Plant announces "it seems between us we've done somethin' nobody's done before... and that's fantastic" referring to tonight's show breaking the attendance record previously held by The Beatles for their concert at Shea Stadium in 1965.
The show gets off to a bit of a sluggish start with Rock and Roll. Page's fingers get stuck in the strings during the guitar solo. The finale leads directly into the first appearance of Celebration Day since 6/9/1972. Page's guitar solo is underscored by some excellent funky fretwork from Jones. The familiar Out on the Tiles intro to Black Dog has been dropped in favor of the riff from Bring it on Home. Plant demands "louder!" during his call and response with the crowd. The non-stop pace doesn't let up as the finale immediately gives way to Page's intro to Over the Hills and Far Away. Plant's voice is quite rough, having lost the momentum gained a month earlier in Paris. Page gets ahead of the band at the end of the guitar solo, creating a funky new arrangement. As the song ends, Plant asks the crowd "did anybody ever make the Orlando gig that we did last time?" adding "so we're in the same country, yeah?"
The crowd becomes restless during a laid-back Since I've Been Loving You, with a few people near the taper repeatedly shouting at those in front of them to sit down. Plant pleads with the crowd to ease up on the barriers before introducing the first appearance of No Quarter. One particularly agitated gentleman near the taper shouts quite angrily "sit your asses down goddammit!" during the first verse. As the song ends, Plant introduces "the mighty John Paul Jones on synthesized piano!"
Before Dazed and Confused, Plant warns "we want this to be a really joyous occasion, I gotta tell you this because three people have been taken to hospital and if you keep pushin' on that barrier, there's gonna be stacks and stacks of people goin'... so for goodness sake, we are animals, but we can move back a little bit." Page shreds through the first guitar solo. The workout section is a bit disjointed. The outro starts out promising with Page soloing wildly over Bonzo's syncopated rhythms, but everything falls apart when the band can't decide how to end the song. Plant tells the crowd "I've joined the Temperance Society where I no longer drink beer... I just drink lemons and honeys" before Stairway to Heaven.
Prior to the first appearance of Moby Dick since 10/9/1972, Plant announces "and now for something entirely different... for the tenth time in United States of America, ladies and gentlemen... for the tenth time in five years, we bring you our percussionist... John Henry Bonham, Moby Dick!" As the drum solo ends, the band skips the return of the main riff, jumping directly into Heartbreaker. Page blazes through the solos. The band skips the final verse, heading straight into Whole Lotta Love at the end of the guitar solo. The Everybody Needs Somebody to Love section has been dropped entirely from the new stripped-down arrangement. Plant once again makes mention of the record-breaking crowd during his boogie rap, saying "fifty-seven thousand people is four thousand more than the people that were at The Beatles' Shea Stadium, gotta boogie!" The medley has been stripped of its classics, leaving only the Boogie Chillen' jam.
The Ocean is preceded by the first appearance of Bonzo's signature count-in. Plant sings the verses out of order, causing a bit of confused hesitation. The band returns to close the show with Communication Breakdown. As they exit the stage, Plant leaves the crowd with a simple "goodnight."
The tape is a combination of two sources, both very clear and well-balanced. The first source is a bit noisy in the high end at times.
Click here for an audio sample courtesy of Black Beauty.
Thirty-three seconds of color footage shot from very close to the stage by a local news team, including brief clips of Rock and Roll, Celebration Day, and Black Dog, can be seen here.

The "Cal Source" tape is a far, far cleaner recording. The other version that's been circulating for years is really awful. The reason - all the audience crap that completely overpowers what would be otherwise a fine audience recording. The Cal Source has a much cleaner sound. It too is from the audience, but sounds centered and closer to the monitors, and for whatever reason, with a much more respectful (read: quiet) audience. This show is important, breaking the Beatles Shea Stadium attendance record, and just the second live performance of No Quarter. It's a great concert without the obnoxious crowd, you might even say a "Must Hear"!