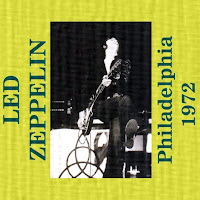 6/13/1972 Philadelphia, PA  Philadelphia 1972
Heartbreaker, Black Dog, Bring it on Home, Since I've Been Loving You, Stairway to Heaven, Going to California, That's the Way, Dazed and Confused, What is and What Should Never Be, Moby Dick
The tape begins with Heartbreaker already in progress. Plant's introduction of Black Dog receives a big cheer from the crowd. Page tears through the guitar solo. There is a long pause before the first appearance of Bring it on Home since 3/5/1971. Plant chants "squeeze my lemon" through his harmonica before a short, frantic guitar solo from Page. That's the Way is cut before the final verse. Dazed and Confused features the first appearance of a fully-formed The Crunge, sans vocals, during the guitar solo/workout section. The crowd gets quite loud and rowdy during What is and What Should Never Be. Plant introduces Bonzo as "a wonderful musician, a great friend" to which Bonzo enthusiastically responds "bullshit!" before Moby Dick, which is cut after only twenty seconds, ending the recording.
The tape is muffled, muddy, distant, hissy, and at times overloaded, improving slightly as the show progresses. There is a great performance buried somewhere in the mud, but this is a rather rough listen, even for a pair of seasoned "bootleg ears".

Have been a YOLZ fan since day one. Have got several shows based on your reviews, you are spot on every time. Just wanted to say thanks!

Thanks for reading the blog and thanks for the feedback! I'm always glad to hear that other people are enjoying this as much as I am.