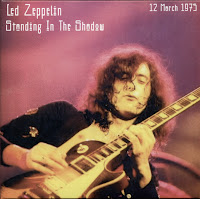 3/12/1975 Long Beach, CA  Standing in the Shadow
Rock and Roll, Sick Again, Over the Hills and Far Away, In My Time of Dying, The Song Remains the Same, The Rain Song, Kashmir, No Quarter, Trampled Underfoot, Moby Dick, Dazed and Confused, Stairway to Heaven, Whole Lotta Love, Black Dog, Heartbreaker
The band's second night in Long Beach begins with a brief soundcheck before Rock and Roll explodes into motion. Page blazes through the guitar solos during a blistering Sick Again. He hints at White Summer briefly at the beginning of Over the Hills and Far Away. In My Time of Dying is devastatingly heavy. Page's guitar cuts out at the beginning of The Song Remains the Same, causing the band to stop playing and start over after a short pause. Bonzo hammers at his drums with incredible intensity as Page's fingers tear across the fretboard at lightning speed. A fantastically epic Kashmir is dedicated to "anybody who got divorced today." The walls of the arena quake under the power of the band's thunderous attack. An excellent performance, one of the best thus far.
No Quarter is preceded by a haunting electric piano introduction. Page solos wildly as Bonzo and Jones explore an upbeat jazzy rhythm during the outstanding instrumental section. A truly amazing performance. Unfortunately, the song is cut during the final verse. Page shreds frantically through the guitar solo during a frenzied Trampled Underfoot. Plant introduces Dazed and Confused as "the first climax that we reached together" before dedicating the song to an absent Roy Harper. The Woodstock interlude is brutally heavy. The band is absolutely on fire during the guitar solo/workout section. Bonzo thrashes wildly at anything within reach as Page erupts in a furious cascade of notes. The relentless sonic assault threatens to destroy the taper's equipment. The frenzy reaches its peak with the explosive outro jam. A phenomenal performance, one of the best thus far.
Before Stairway to Heaven, Plant tells the crowd "the vibes are really good tonight, they're better than last night... too many reds," adding "by the time we get to The Forum, we should be sky high!" Page delivers a fantastic guitar solo, one of the best in recent memory. As the band returns to the stage, Plant leads the crowd in a Happy Birthday sing-along in honor of their attorney Steve Weiss. The funky theramin freakout during Whole Lotta Love features an excellent rendition of Licking Stick-Licking Stick in addition to the usual The Crunge interlude. Plant is in top form during a riotous Black Dog. Heartbreaker features an outstanding I'm a Man blues interlude between the guitar solos. A truly amazing performance. Must hear.
The tape is a combination of two sources. The first, used through the initial verses of Stairway to Heaven, is a bit noisy and overloaded. The Second, used for the remainder of the show, is another excellent Mike Millard recording.

No comments for this all time great show?
Listening now and loving. I still go back to TYOLZ site whenever i dig the shows. God bless you mate. A premier Zep blog.

Def one of their greatest shows. .Something about LA brought out the best in the boys. . the broken string in TSRTS is priceless:):) A "must hear" for sure!!!

Hmm... I'm not crazy about this show. Plant's vocals annoy me, and it seems to drag on at times. A lot of 1975 shows, including this one, lack dynamics. It's all loud and strong, and the lack of contrast can be wearisome on the listener. Other people in the Zep community have noticed this, too, about the 1975 shows.