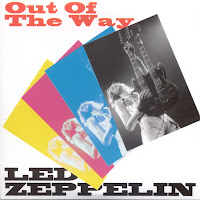 5/18/1977 Birmingham, AL  Out of the Way
The Song Remains the Same, Sick Again, Nobody's Fault But Mine, In My Time of Dying, Since I've Been Loving You, No Quarter, Ten Years Gone, The Battle of Evermore, Going to California, Black Country Woman, Bron-Y-Aur Stomp, White Summer/Black Mountain Side, Kashmir, Over the Top, Achilles Last Stand, Stairway to Heaven, Rock and Roll
Each metallic note of Jones's bass line punches through the cacophonous roar as Page's fingers race across the fretboard during The Song Remains the Same. Plant greets the crowd, saying "from one Birmingham to another" following an aggressive Sick Again. Page blazes through the guitar solo in Nobody's Fault But Mine. As the song ends, Plant tells the crowd "this is the beginning of what is now being affectionately called the middle leg of our tour," joking "can you imagine the middle leg of a Zeppelin tour?" He exclaims "come on, burn in hell!" at the beginning of the a cappella "oh my Jesus" section during a thunderous In My Time of Dying. There is a slight cut in the tape during the You Shook Me tease. Plant comments "I think this is gonna be a good night tonight" as the song comes to a close.
Since I've Been Loving You is beautifully mournful. Jones's somber piano work sets the mood as Page shreds through an emotionally charged guitar solo, penetrating deeper into the crowd's collective soul with each refrain. Page seems to be having a bit of trouble with his wah-wah pedal as No Quarter begins. Following a brief cut near the beginning, Jones's piano solo develops into a fantastic hard rock jam. The band experiments with a variety of different styles and rhythms during Page's long, wandering guitar solo. As the piece comes to a close, one of the tapers can be heard saying "you got three more minutes, y'know?" to which his partner replies "I know it, I'm gonna change it as soon as this song's over." Page shreds wildly as Bonzo pummels the crowd in violent bursts during the song's outro.
Jones has recently acquired a triple neck acoustic guitar, which Plant refers to as his "secret weapon." Ten Years Gone is a bit sloppy at times. Page's fingers get stuck in the strings during the guitar solos. There is a brief cut near the beginning of Page's guitar breakdown during Bron-Y-Aur Stomp. Bonzo is introduced as "the greatest rock drummer in the band" before Over the Top. Page hints at Dixie, along with his usual homage to The Star-Spangled Banner during the experimental guitar solo prior to Achilles Last Stand. Someone near the taper can be heard shouting "I got the six-pack of Schlitz!" during the bow segment, which is cut slightly near the end. Bonzo thrashes at his drums with incredible intensity during Achilles Last Stand. Unfortunately, there is a cut in the tape near the end of the song. Page blazes through a fantastic guitar solo during Stairway to Heaven. As the band returns to the stage, Plant asks the crowd "was it alright?" just before Rock and Roll crashes into motion. An excellent start to the second leg of the tour.
The tape is fairly clear and well-balanced, if a bit distant and noisy in the high end.
Click here for audio samples courtesy of Black Beauty.

I was a senior at Sheffield High in North Alabama, and 3 of my buddies and I checked out of high school that day to drive the 2 1/2 hrs to B'ham for the show. It was great! We were the envy of the school after that. I still have the $7.00 ticket stub (Although I think we had to pay $15) but it was well worth it.

You've forgotten of put that Plant flubs the lyrics on The Battle Of Evermore and it sounds strange!

Actually, it's "Come on, Birmingham!" Plant shouts during IMTOD.

I recently shared out a previously uncirculated third source for this show, which, in spite of a few cuts and tape issues here and there is arguably the best sounding recording of this performance, which is one of the better '77 shows IMO.

Dang if I didn’t find another good update on this web site!

The version from Black Beauty is a fine audience recording with a few brief cuts. I’m in the middle of No Quarter, and if the rest of the show is like the first half, this is the best 77 show, second to June 21.

This show has developed into one of my favorites from 77.What strikes me the most is that Jimmy is actually experimenting a little during the intro of Achilles he changes his phaser from the usual setting heard throughout this tour something he would do two weeks later at the third Maryland show.

Really great concert. No quarter and Stairway absolutely smokes! One of their best performances for these songs